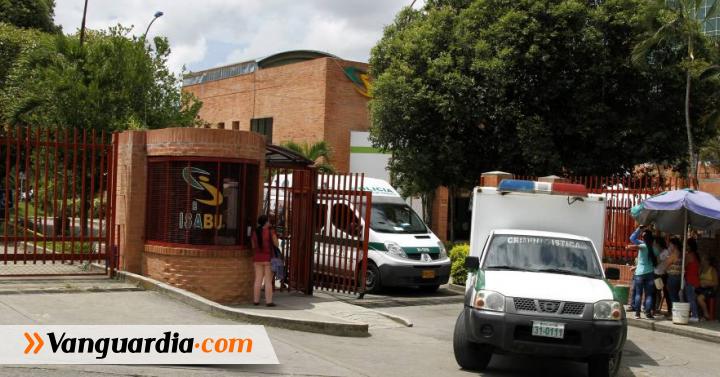 Police, the Public Prosecutor's Office and the National Institute of Forensic Medicine are conducting an investigation to determine the cause of the death of an 11-month-old baby who arrived at the Northern Local Hospital with possible signs of abuse in her body.

This fact, which generated consternation among the Bumangueses, was discovered around 3:00 in the morning. Yesterday, when an 18-year-old girl arrived in the emergency area of ​​the medical center with the girl wrapped in a sheet.

The woman looked harassed, sought help to save the life of her niece, so she was attended to immediately.

However, despite the efforts of the medical staff, they could not do anything for the girl. I had no more vital signs.

According to Tatiana Chávez, the deputy scientific director of the Bucaramanga Health Institute, Isabú, reported that after an evaluation, doctors found evidence of possible violence in the child's body.

"In the examination, the doctor discovers that the girl has some signs of abuse, so it is decided that the case study is done by Sijín. The doctor says that at the height of the chest the girl has a stroke or some injury," said the official .

According to the story given by the aunt to the authorities, she has been under the care of the baby since October 31, because the mother could not take care of her: she has two other children and would be narcotics.

Around 5:00 pm last Sunday, the aunt and the girl were at a cake game, when the child's mother told him he was going to take her because she was his daughter.

Not even 24 hours passed, when the last Monday at 8:00 AM, the mother arrived with the baby, telling her sister that she would leave him again because they could take better care of her there.

"I did not get to look at her, she was with me and we shared some time both. Then my husband was angry for having received, he told me that if something happened to the girl they would blame me," said the aunt.

And indeed, by 1:00 am yesterday, the aunt noticed something abnormal in the little one. He took a deep breath, his abdomen slightly inflamed and he was pushing. Even so, they continued to sleep.

At 3:00 in the morning, the family member woke up and checked her niece again to see how she was, but she noticed that she was pale, cold, with white eyes. In a hurry he took her in his arms and took her from his residence in the San Francisco neighborhood to the Northern Local Hospital, where he arrived lifeless.

"Everyone who knows us knows that we are incapable of hitting the girl, we love her very much, she is always well dressed, there is nothing missing, they can not say that we have hit them," added the relative, who acknowledged that his sister, 20, is a drug user.

we did not mistreat her "

Yesterday, the body of the minor remained in the morgue of the Legal Medicine, section Bucaramanga, where the cause of death is expected to be established.

Faced with reports that it could be a death from possible abuse, parents categorically denied possible child abuse.

"We did not mistreat her or something like the comments say, how to get to them, we would not do any of these things, we are the parents. Suddenly, he would fall out of bed or something, we do not know anything because the girl was with the aunt, "said the father.

The man added that "we are also waiting for them to tell us what he has died, to see what the research says and the results here (Legal Medicine)."