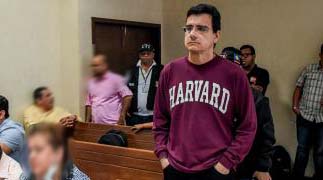 The former dean of the Autonomous University of the Caribbean Ramsés Vargas Lamadrid did not appear yesterday morning at the Judicial Service Center for the hearing of substitution of security measure, which procedure was done by him on February 25 last.

Vargas Lamadrid has been arrested in the El Bosque district prison since last year after a judge ordered his arrest as a result of the prosecution suit against him.

Rafael Pacheco Vega, a criminal lawyer and representative of the Autonomous University, said that as an actor in the process participated in the scheduled diligence, but "Vargas Lamadrid was not present nor his lawyer, so the judge decided to postpone it."

According to Pacheco, this is the second time that the former rector of the university makes such an application, based on article 314 of the Criminal Procedure Code.

"We can not know the cause invoked by Ramses Vargas because Article 314 is ample.It may be due to illness, father head of the family.We must wait for the diligence to be developed to see what is the claim or interest of Vargas Lamadrid," said Pacheco .

On a new date for this hearing of replacement measures, Pacheco indicated that "there is no new date, they have to make the request".

It should be noted that in this action, Ramsés Vargas requested a lawyer from the Ombudsman's Office to represent him before the courts. This would be added as the fifth supporter who supports the former director to try to distort the prosecution's thesis that involves him in diverting the millionaire resources of the university.

Silvia wants to go to the UAC rectory. Before the Barranquilla Judicial Service Center, a request for the reintegration of the right before a Municipal Criminal Judge with security control functions was presented by the former Autreoma of the University of the Caribbean, Silvia Guette Ponce.

At the hearing scheduled for Wednesday, the judge appointed by the Service Center must decide whether Gette Ponce should return to the UAC dean.

Currently, Silvia Gette Ponce is serving a sentence of six years and five months of house arrest, which in August of 2015 was imposed by the 34th Criminal Court of Bogotá for the crime of bribery in criminal proceedings, which confirmed in April 2018 Criminal Cassation of the Supreme Court of Justice.

You may be interested: Purchase and sale of goods abroad Ramsés Vargas