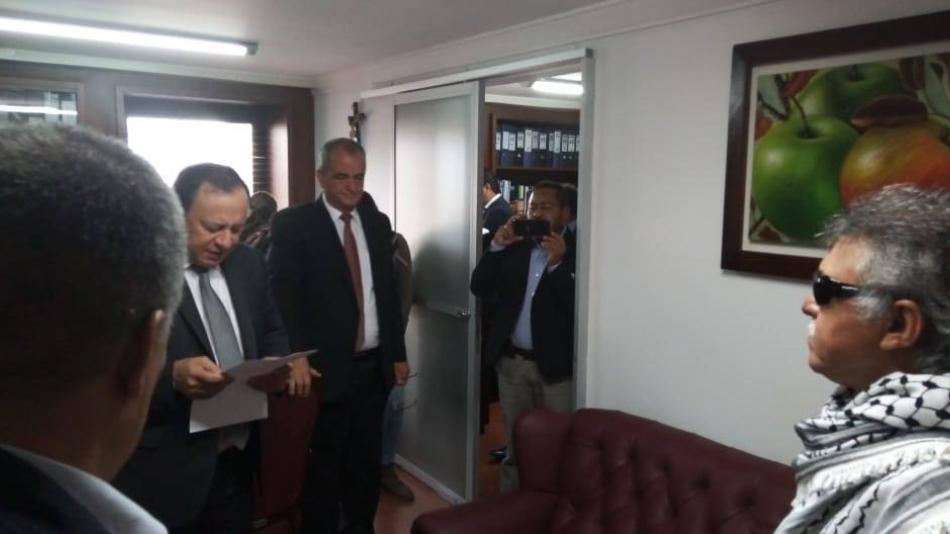 The ex-guerrilla and now representative of the House for the Farc Jesus party Santrich called on Tuesday "calm" to President Ivan Duke after assuming his place as congressman.

Santrich he had not been able to take his place in the House of Representatives due to his detention, which occurred because of his alleged relationship with drug trafficking following the signing of the peace agreement.

After a series of judicial decisions the ex-guerrilla was released, but is still being investigated by the Supreme Court for a concert to commit a crime in drug trafficking and drug trafficking.

Minutes after the inauguration, on Tuesday, Santrich asked President Duque "tranquility" and who "act as agents of all guarantees, taking into account that there is something called presumption of innocence."

"It seems to me that he (Duke) can not prejudge or make judgments in parallel and let the courts act, "said the former guerrilla.

On Tuesday morning, Santrich also passed the Supreme Court, where his lawyer, Eduardo Matyas, said the disposition of its defendant to appear in the process that follows that superior court.

Matyas also stated that the Attorney General's Office, to which President Iván Duque has applied to take part in the Santrich case, "has no jurisdiction" about the ex-guerrilla.

Sober act
His tenure was given very early on the morning of this Tuesday and in a simple act in which were also present the former representative of the House of Benedict of Jesus González, who replaced him temporarily, and the senator of Polo Iván Cepeda, among others.

The act was given in the presence of the First Vice-President of the Chamber, Atilano Giraldo, who took the oath as a congressman, in the office of the vice president of the corporation.

On Monday, Benedict de Jesús González, who was temporarily replaced by Santrich, announced that he had been notified of the termination of his work as a congressman, which was one of the steps for possession of the ex-guerrilla

Jesus Santrich continues to be investigated by the Supreme Court for drug trafficking.

After that, the Accreditation Committee of the Chamber of Deputies left the company in certification that allowed it to take office and the act was fulfilled this morning of Tuesday.

Santrich's headquarters was awarded in July last year by the National Electoral Council (CNE). as part of the agreements signed between the last government and the FARC.

This process led to the rejection of some sectors of opinion and even, President Duque asked the Attorney General to intervene in this case..

Regardless of, Other voices, like the leader of the Farc party, Rodrigo Londoño, They supported his arrival in Congress.

In good time to strengthen the defense of peace and what was agreed upon; welcome mate @JSantrich_FARC for this new scenario of struggle, transformation and representation of ordinary people in the House of Representatives? pic.twitter.com/suQ6FbVGIL