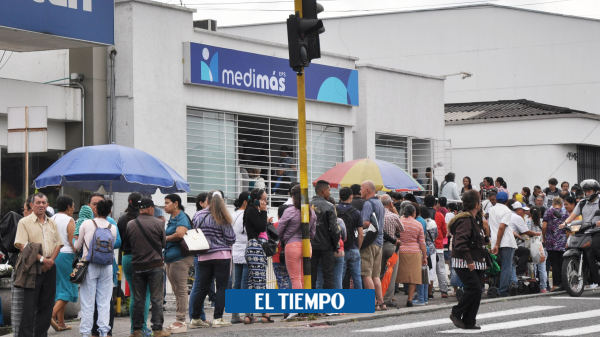 Everything seems to indicate that Medimás will not complete two years of operations on August 1st. This Tuesday night two decisions of the Administrative Court of Cundinamarca that seem to define the future of the EPS that today has 3.9 million members were known.

The first order the National Health Superintendence to revoke the authorization of operation granted to Medimás, both in contributory and subsidized schemes, and in a period not exceeding six months, transfer all its users to other insurers.

And the second, it reverses the sale of all the assets and liabilities of Cafesalud EPS and Esimed SA and the purchase agreements made in 2017 in favor of Prestnewco and Prestasalud, who are the owners of Medimás.

This second decision means, in a nutshell, that the whole process of sale of Cafesalud that gave rise to EPS Medimás is canceled and the transfer of the intangible assets (affiliates) occurred on August 1 is also definitely suspended. 2017

The first decision of the court orders that the Ministry of Health, as rector of the policies of the general social security system, adopt a specific regulatory framework that allows the Superintendent of Health to act to fulfill these tasks.

In the same sense, the decision insists that, for the relocation of affiliates, the guarantee capacity and the performance evaluation of the EPSs operating in each of the departments and municipalities where Medimás provides its services should be taken into account. ensure continuity of care for all patients.

It is worth clarifying that the request justifying this decision was submitted by Aníbal Rodríguez Guerrero on June 20, 2016, before the entire sale of Cafesalud shares was given in favor of Medimás.

Rodríguez argued that the Superintendence of Health was responsible, as Cafesalud EPS, of the violation of their rights in the massive transfer of more than 4.3 million users of Saludcoop, arguing that Cafesalud lacked enough doctors, clinics and hospitals to care for the population and that, because of this circumstance, the collective right to health was threatened and endangered.

In that sense, he requested that Supersalud and Cafesalud be held liable for the danger that the five million members would be in that moment and that a peremptory review of the network of clinics and hospitals that the EPS should receive should be ordered. they will adopt the measures and the health of its members will be guaranteed.

In addition, The Court held in its judgment that these claims were not specifically adjusted to the actual situation of the affiliates, since they were already in Medimas., for which precautionary measures were ordered to guarantee their rights. That, in view of the violations, resulted in the decision.

In any case, the Court requires that while this process is in progress, Medimás is responsible for all the services of the 3.9 million members it has today, while ordering the creation of a commission to verify compliance with this composed of the plaintiff, the Prosecutor's Office, the Ministry, the Superintendency and the Ombudsman's Office.

If the first decision was serious enough to think about the beginning of the end of Medimas, the second one is a real puntillazo. It is a popular action moved by Senator Jorge Enrique Robledo, who in the resolution undoes the sale of Cafesalud two years ago.

Popular action was instituted because, according to the plaintiffs, the lawsuit violated collective rights of access to health, in addition to violation of free economic competition, because there was only one full offeror without authorization from the Superintendency of Industry and Commerce.

In addition, it orders the Superintendent of Health to complete forced administrative intervention in Cafesalud within the next 10 days to complete its liquidation., under the premise that this entity is still in the process of institutional reorganization and the program of progressive dismantling of its operations was not approved.

For its part, the ruling also requires Esimed (operator of the clinics Saludcoop) to present a schedule within three days for the Supersalud specifying the dates of compliance with the objectives of the rescue plan and normalization of those clinics and clinics. whose plan can not be more than 12 months.

In the same vein, the Court orders the Superintendency of Industry and Commerce to investigate the restrictive practices of competition in which those responsible for all these failures have incurred.

After knowing the decision of the court of Cundinamarca, Medimás indicated that they respect the sentence, but that they will exercise "their right to the defense and will impose the resources that the law gives them".

"We want to clarify that the judges who have taken this decision have a continuous challenge that has not been decided, which shows a legal defect in this decision of the Administrative Court of Cundinamarca," said the EPS.

In the same way, they made a "call to the tranquility of the general public, to
to avoid that the effect of the failures pronounced today, without having been notified in due form, unleash consequences similar to those generated with the criminal type called economic panic. "

Lastly, Medimás indicated that he will continue "working until there is no substantive decision".

The Superintendent of Health, Fábio Aristizábal Ángel, told EL TIEMPO that it will study the sentences in all their extension to fulfill them. without the greatest trauma. However, it clarifies that, in one way or another, the decisions of the Court are consistent with the measures that have already begun to take place.

In fact, a few weeks ago the Superintendency had already revoked the Medimás operation in three departments and is in the process of extending the measure to other jurisdictions.

Jorge Gómez Cusnir, a shareholder of Prestonewco, the company that owns Medimás, said that this moment he analyzes with his group of lawyers the text of the judgments to issue a concept or to interpose the legal resources that may take place.

From Lima, Health Minister Juan Pablo Uribe told the newspaper that although he knows the depth of the decisions, he can affirm that in any decision, there must be a guarantee of the right to health of members and continuity in treatments and services . the same.

Dennis Silva, a spokeswoman for Patients Colombia, says decisions are aligned with the interests of members, especially those most in need. "It is an expected, necessary and pertinent decision for the country. The issue is where EPS meets the criteria for receiving patients. We hope there is no other guarantee failure here, "he said.