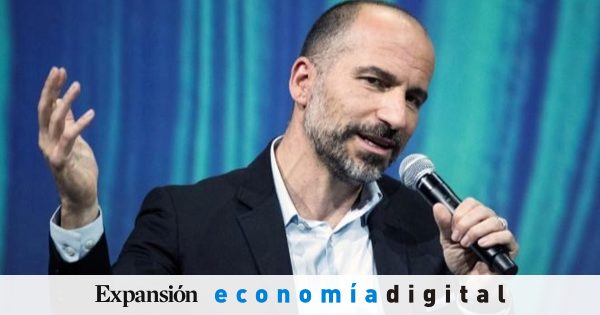 The company expects to raise $ 10 billion with its IPO planned for early May.

Uber has spent most of the past two years cleaning up his image as an aggressive company with a propensity to destroy its rivals. Since taking over as co-founder Travis Kalanick, fired on a series of scandals in 2017, CEO Dara Khosrowshahi has set a new tone, promising to "do the right thing" by trying to re-establish relationships with drivers, cities and regulators. In face of the company's IPO, he spoke of the "big responsibilities" posed by listed markets.

But despite the change in tone, Uber's underlying strategy remains unchanged from its earliest days: the IPO documents show that it plans keep a high expense to gain market share, even if it continues to accumulate annual losses of several million dollars.

The 10 billion dollars Uber hopes to raise when it opens the capital in New York in early May will increase its funding to $ 16 billion, giving it plenty of ammunition ahead of its rivals. This recalls the company's founding motto that cars with driver are a business in which critical mass is very important, and the winner gets the maximum, if not the whole market. "Our strategy is to build the largest network in each market to get more liquidity thanks to the net effect, which we believe leads to a margin advantage," Uber said in those documents.

Uber's OPV brochure talks about a slow increase in car rental revenues from the driver industry due to competitive pressures to finance fares and reward motorists. Uber noted that these trends will continue in the short term. "We intend to invest aggressively, even in the short term, because we believe in the long-term value of the market opportunity", said Uber.

Khosrowshahi has warned investors that the company is not rushing to achieve profitability, a message that should be kept when Uber starts its tour of investor meetings in the coming weeks. That message is similar to that of rival Lyft, whose executives claimed before their IPO in March that the company would take years to be profitable.

Under Khosrowshahi, Uber increased its spending to gain momentum with new projects such as the food delivery service Uber Eats, its division of freight transport and rental of electric bicycles and scooters.

But the IPO brochure recalls the weight that Uber's original operations have on its business – and its losses -. Revenues of $ 9.2 billion of cars with driver accounted for 80% of the total last year. Growth is Declining Revenues increased 33% from 2017 to 2018, while they nearly doubled between 2016 and 2017. Adjusted revenues in the top businesses, excluding such aspects as some incentives paid to drivers, stabilized during the second half of last year. 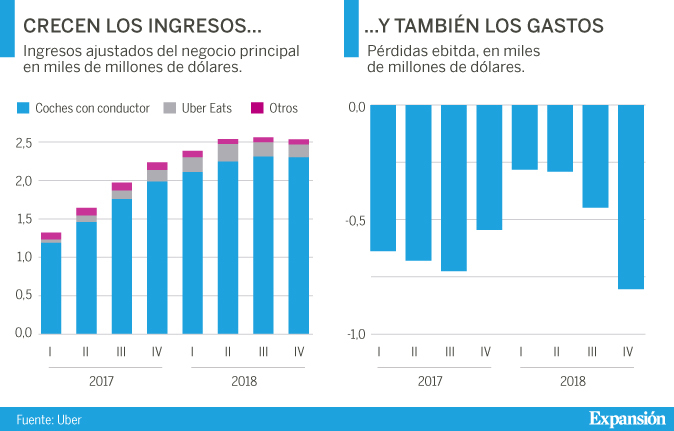 Competition is to blame. Uber involves price wars with rivals around the world, from Lyft in its domestic market for Ola in India and Didi Chuxing in Latin America. The new food distribution segment is also relentless as companies such as DoorDash have closed major risk capital rounds to fund their expansion. Although Uber claims to have majority share of gross reserves "in all major regions where we operate", he also acknowledged that his participation in the motor-driven car market "fell broadly in 2018 in a considerable number of the markets in which we operate," as he was forced to coincide with the "strong subsidies and rebates" of the rivals.

"The problem with Uber's current assessment is that it assumes that the company already benefits from a network effect, which may or may not manifest itself in the future. [objetivo de 100.000 millones de dlares] looks very aggressive, "says Ben Barringer, an analyst with investment manager Quilter Cheviot.

Competition has been especially costly in its first and largest market, the US, where Lyft has reached a market share close to 30%, according to market analysis group Second Measure. Many investors and analysts hope that once the two companies are listed on the stock exchange, they stop pushing prices down and give bonuses to drivers so aggressively, which will help pave the way for the benefits.

Uber's IPO offers arguments in favor of this in its "basic platform contribution margin" – an indicator of how much money the company makes with cars and the distribution of food when costs are discounted. The indicator, which excludes investments in research and development and general and administrative expenses, aims to show the basic profitability of the business.

"What is presented to us is an extremely attractive proposal in terms of user growth, revenues and transactions", says Laith Khalaf, an analyst with British broker Hargreaves Lansdown. But the lack of underlying profitability continues to make it a risky bet, he adds.

The company's contribution margin was positive for four consecutive quarters from the end of 2017 until the third quarter of 2018, reaching a ceiling of 18%. But it returned to the negative at the end of last year, coinciding with the new Lyft price reduction. Uber said that the margins will continue to be negative in the short term due to the expense to maintain its weight on the shifts and expand the Eats. "The question is, where does that end?" Khalaf points. "You really are a rehn of the competitive environment … The further away the benefit, the greater the uncertainty for investors"

Uber says that "it is not necessary to invest so much" in promotions and incentives if rivals decide to do the same, to "change their strategy for profitability in the short term." Multiply by more than twice the $ 6.4 billion in cash and cash equivalents you have in late 2018 to help Uber achieve the goal. Lyft, by comparison, has 2,800 million at its disposal after raising 2.300 million in its IPO.

"Over the next two or three years, we have to see if market share stabilizes, if Uber can keep its share close to current levels, that should be good," explains Randy Hare, director of explosion analysis at Huntington Private Bank .