In video | They prevent new hood attack for UA 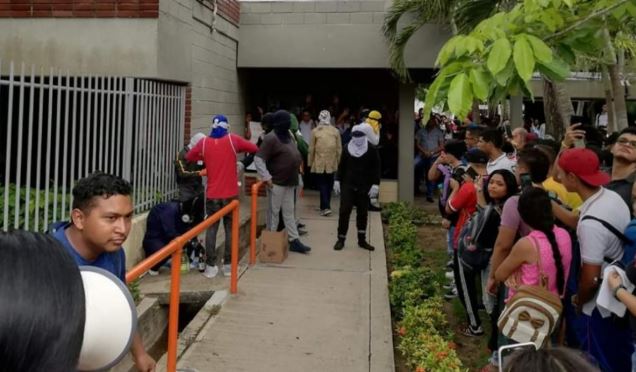 Students and workers made the human chain. Institution rejected new acts of vandalism.

A group of students, teachers and administrative officials prevented a new attack on the Universidad del Atlántico rectory on Monday. The team formed a human chain to prevent the misfits from throwing stones and burning the facade of the administrative office.

The hooded, defiantly, threatened to attack the rectory, but with songs of nonviolence, people once again prevented disorder. "We want to study, no more violence," were the voices that were heard amid the expectation of more people.

María José Montes, a student of the seventh semester of Business Administration, stressed that a group of students will face "in a harmonious way" with the hooded.

"We feel supported by the administrative staff, the first time you see this and somehow we knew how to deal with this vandalism. The result was positive because they did not violate and did not undermine the city's infrastructure," said the student.

Likewise, he urged the entire student population to join the peaceful confrontation of the violent group that led several acts of violence within the institution.

As the fighting began, a group of the Mobile Anti-Riot Squad (Esmad) was present at the entrance of the higher education institution.

For his part, Federico Vidal, a graduate who was doing procedures inside the center of studies, said that no more "vandalism" should be tolerated within the Uniatlántico. "We are tired of the same small group of always wanting to impose their will on those premises. We should not allow and condemn such facts," he said.

The University of the Atlantic made a call for non-violence in the alma mater, where precisely this week student elections will be held before the High Council and other collegiate bodies.