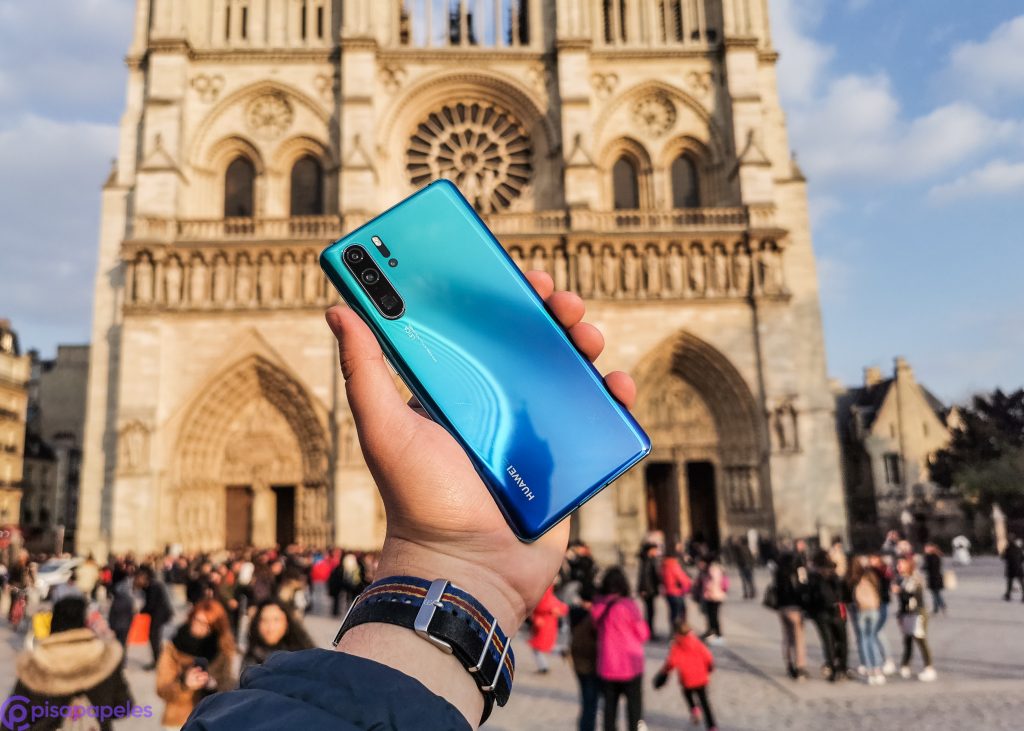 Huawei introduced the new generation P series: the P30 and P30 Pro, devices that are the Chinese company's first bet for this 2019 high-end area, but it is the latest model that he calls us today.

The Huawei P30 Pro comes with a clear goal: to position itself as the cell phone with the best camera on the market. In addition, there are few developments in the performance and specifications department in general, and we can see that the P30 Pro is a fair and necessary improvement over its predecessor.

Before you start, two things. First of all, we would like to thank the people of Huawei Chile and LATAM, who provided us with a device immediately after its launch to bring them their respective analyzes. Secondly, and this remains as a warning, because it is a device that does not yet carry all the functions advertised by the company, ergo, we do not have the final software at the time of publication of this analysis.

Huawei P30 and P30 Pro maintain some lines very similar to those of the previous generation. Both are quite round devices, with a design quite sober in my opinion, and do not stand out much for having bold or striking lines. This is not bad, as it demonstrates the maturity that Huawei has achieved in this aspect, with its own design language, which we saw recently, since it was replicated in the other cell phones of the company.

However, the bold thing we will find it in the section of colors to choose from. Although we have typical black and white colors, we also have three more that come from everyday life. As in P20 and Kill 20 we had Twilight, now we have Aurora (the color of our particular unit), Crystal Breath (which is like a half-litmus white) and Amber Sunrise (a kind of very elegant reddish orange).

Other news that we can appreciate at the screen level. In the case of the P30 Pro, we have very small frames, accompanied by a slight curvature at the edges and now the notch only has a drop shape of water, which houses the only front camera of the device.

By the way, you may notice that there is no longer a headset on top, this is because Huawei has implemented a new system that resonates the crystal of the device to generate the sound of a call. The problem with that is that we have lost a feature that many enjoy: stereo sound. There is a small downgrade compared to the last generation.

The back of the device is a good way to distinguish between the two siblings because the P30 Pro has a square cut to accommodate the new telephoto, while in the normal version it has a normal circumference for this lens.

It's a very solid, well-constructed and ergonomically pleasing handset, which feels super good in your hand, though it does not offer a feeling as superior as the others in your competition. That's my only complaint about that. Oh well, the hearing aid door is lost, and Huawei does not include any type of adapter in the box. Bad there.

As for hygiene and decoration, as with any phone in this range, it is a good magnet for fingerprints, but it does not contain as much fat or sweat as the others, which is very good. We see this complemented by the fact that the device is IP68 certified, which means it is resistant to water and dust.

The screen of our protagonist reaches 6.47 inches in size. Yes, it is quite large – it actually is larger than the Mate 20 Pro, although unlike this, its resolution is a bit smaller, which is Full HD + (1080 x 2340 pixels).

Anyway, it's a screen that looks pretty good. It's an OLED panel that's quite colorful and bright enough, but clearly lags behind other phones, especially with a Galaxy S10 (yes, I know that's a slightly unfair comparison, but for the same price you'd expect more).

The notch, having a shape similar to a drop of water, is much less irritating than the other notches available in the market. It's obviously notched, so it takes time to get used to it.

Camera: the most versatile on the market

I know this is the section that matters to everyone. But I will try to simplify, because after this review, we will have a specific analysis of the photographs captured with this device, stay connected!

Now, back to what we're interested in, the Huawei P30 Pro comes with a set of four rear cameras and a front – the last one is 32 MP. The first sensor is 40 megapixels, whose optics have a f / 1.6 focal aperture, and comes with the new RYB sensor (instead of the typical RGB), which in fact allows much more light to be captured.

The second and third cameras correspond to the wide angle and the new telephoto, respectively. The first is 20 MP with a f / 2.2 aperture, while the telephoto lens type is 8 megapixels, f / 3.4, which allows an optical zoom of up to 5 magnifications. The fourth camera is the Time of Flight (ToF) sensor, which is used to capture depths and thus improve the bokeh effect generated by portrait mode.

The overall quality of the images is enormous: we have an excellent dynamic range, a great reproduction of colors and, thanks to Leica's optics, the sharpness of the photos reaches a good level. As for the video, our protagonist is able to record up to 4K, however, only at 30 frames per second. In any case, Full HD recording at 60 FPS is available.

Both the normal lens and the telephoto lens have optical image stabilization, and in this last lens is very noticeable, and is very useful when using the different types of zoom that the phone offers and obviously when it comes to recording videos

Again, there will be a specific review where I will more specifically detail the operation of this camera, the different modes it brings, and so on. As a quick conclusion, I can say that Pixel 3 has quite complicated here, because P30 Pro almost equally satisfies all the points that the Google device performs excellently, but to this adds the versatility of having older focal lengths to be reproduced thanks to the wide angle and the new telephoto lens.

Then I leave a gallery of photos and some videos so you can evaluate the overall quality of this camera (Do not think these are the best photos because I'm reserving for review):

It is in this section that we do not see great developments, at least with respect to Mate 20 Pro. The processor that claims to be present is the Kirin 980, which has all the Artificial Intelligence features the other device has. This set comes with 8 GB of RAM and, in the case of our drive, has 256 GB of internal storage – the base model comes with 128 gigabytes.

The combination results, as expected, in overall very good performance within the system and using applications. The truth is that it is very rare to talk about slow phones, practically everyone works exceptionally and without any kind of obstacle or noticeable delay. The Huawei P30 Pro is no exception.

EMUI 9.1 is the layer that comes in Android 9.0 Pie, and as always, it is an interface style that is hated by many and at the same time loved by many. Personally, I'm not disgusted, but I'm not a fan either. I am one of those who add the application drawer – option that is available in the settings menu – and install the Gboard immediately.

Either way, it is a very colorful and simple to use interface. Huawei's idea of ​​copying the iOS interface has been fading over the years. It is a enter Android only, quite Asian. EMUI 9.1 demonstrates, just as in the design section, the degree of maturity the company has achieved by trying to create its own visible identity without having to look at the partner on the side. Although, yes, there are still many unnecessary bloatware features.

One of the newest features in terms of hardware is the built-in fingerprint reader. Yes, it's still optical, but it's 30% faster than found in Mate 20 Pro – this according to Huawei. I personally have never occupied the Mate device reader, but colleagues say the latter seems faster.

In any case, there are still the same disadvantages of using a reader under the screen, that is, it is still slow compared to a capacitive, which still requires increasing the brightness of the screen to illuminate the finger, and that our muscle memory will not always be enough to reach the space of recognition, etc.

In general, we note that the P30 Pro is an evolution of rigor compared to the P20 Pro in terms of hardware. Huawei used the same Mate 20 Pro formula on this device, which means it has good features and functions.

The advantage that Huawei models have over any other top-of-the-line Android is that by using its own processor and aggressively modifying basic software, the company can achieve incredible levels of autonomy-level optimization.

The battery of the P30 Pro reaches 4200 mAh – the same amount as the Mate 20 Pro. Like the latter device, you can achieve brutal autonomy, even with intensive use. I'll show you the detail:

As you can see, the Huawei P30 Pro pretty much managed to last almost two days with a very moderate and mixed use in terms of WiFi networks and mobile data. The first day was unplugged around 9:45 am and arrived at midnight with just under 50% battery available. Simply spectacular.

Conclusion: This or the Mate 20 Pro?

If at this point you are looking to change your device, and you have the opportunity to buy this or the Mate 20 Pro, you have two options for "sacrificing": camera or multimedia consumption.

If you choose the Mate 20 Pro, it's because you prefer the screen a little better than the P30 Pro and obviously the stereo sound. If you prefer to sacrifice multimedia consumption instead of the camera then I say you will not regret it when choosing the P30 Pro, especially if you like taking pictures.

If this is not why it is difficult to say which of the others, because they are quite similar in all respects.

The strong point of the Huawei P30 Pro is the camera, and this is undeniable and undefiled. I still do not know if it will be the best camera on the market – it still needs to be seen compared to the Pixel 3 – but I'm sure we're on the device with the most dynamic camera of all smartphones currently sold.

The most dynamic, because it offers different focal distances to play: from a wide angle, to a telephoto lens that allows zoom up to 5 times without any help from software, but everything is a pure optical In addition, the night shots, as you may have appreciated in the pictures, are very good, and others are talking about the photos of the day. They are simply beautiful.

Of course there are some points that are not remarkable for everyone: the lack of a hearing aid port, a screen that although good, is not the best, can not record in 4K to 60 frames, that EMUI is not the best Android skin , and so on. But if we see the good sides: excellent camera, a spectacular battery, a very good performance, a nice design, among several others, we realize that really is a very good team.

But of course, the P series is not the real flagship of Huawei that has all the news that the company has to offer, since everything that is reserved for the Mate family is released later this year, so the P30 Pro is only a snack that the Chinese company has on hand to grow in the world of cell phones.