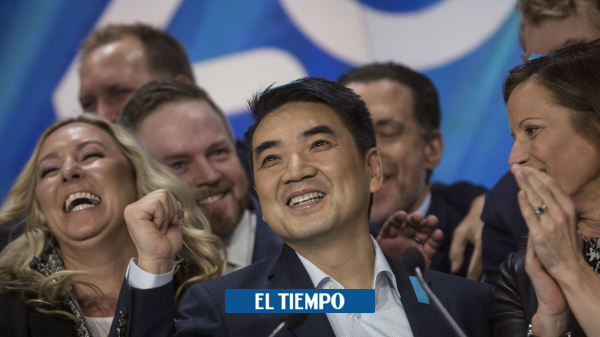 After hearing Microsoft co-founder Bill Gates deliver a speech on the Internet three decades ago, Eric Yuan decided he wanted to be a part of the dot-com boom in Silicon Valley. So the Chinese-born entrepreneur came across an obstacle: the US government denied the visa application, not one, but eight times.

After two years of rejection, Yuan finally entered the United States and Now it is the main shareholder of the videoconferencing services company Zoom Video Communications, which raised $ 751 million on Wednesday in an initial public offering (IPO).

Shares of the company rose to 62.71 at 11:39 am on Wednesday after they began trading on the Nasdaq Global Select Market in New York. the share of Yuan and his family in 3,200 million dollars, according to the index of billionaires of Bloomberg.

Yuan, CEO of Zoom, joins Alphabet's Sergey Brin, Nvidia's Jensen Huang, and Tesla's Elon Musk, who, like him, are immigrants who have become billionaires after helping to found companies in Silicon Valley.

USA is the country chosen by more than three quarters of the wealthy Chinese who seek to emigrate, according to the Hurun Research Institute and the immigration consulting Visas Consulting Group.

The global videoconferencing market is expected to grow by almost 8 percent a year by 2026, according to Transparency Market Research, as more and more workers are doing their homework.

Zoom reported net income of $ 7.6 million and revenue of $ 331 million for the year ended January and is now nine times higher than the $ 1 billion obtained after a round of financing two years ago.

Prior to launching Zoom in 2011, Yuan worked at WebEx Communications, an online conferencing company, and then at Cisco Systems after the company acquired the company in exchange for $ 3.2 billion in early 2007.

Yuan had the idea of ​​Zoom, which has clients like Uber and Wells Fargo, after traveling 10 hours on several occasions to see his girlfriend when they were college students.

"To have a smart device one day and with a single click to talk to you, to see it, that was my dream, right?" Commented Yuan in a July interview with US venture capital firm GGV Capital. "And every day I thought about it."