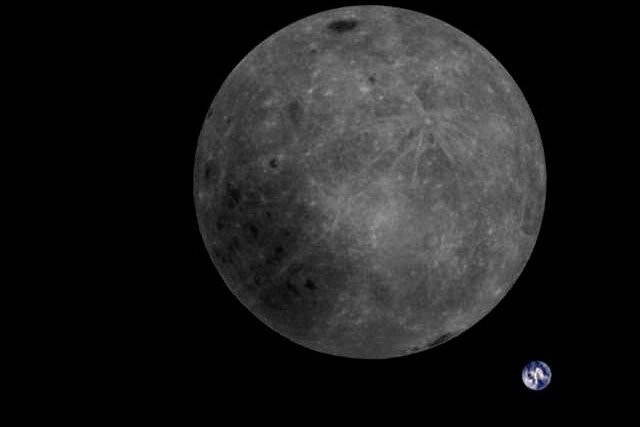 China continues to make history in space exploration and today he shows us a new achievement that is marveling the world. The image that opens this post corresponds to the hidden side of the Moon in all splendor, while deep down our planet is company in space.

The image is courtesy of Chinese satellite Longjiang-2, which entered lunar orbit in June 2018, and is slowly beginning to send information as part of the mission that recently brought China to the Moon for the first time in history, on the hidden side of the Moon.

It is not the first photograph we have of the hidden side of the Moon, but it is the first one that comes to us through a satellite that is in orbit only to observe the moon. Therefore, it is a feat that continues to position the Chinese in an important way.

As we know, the Chang-e-4 spacecraft stepped on the hidden side of the Moon earlier this year, a feat that was Chinese Communications Satellite Queqiao, which hit the moon during the launch, in mid-last year, of the Longjiang-2. The Queqiao's mission was to help Chang-e-4 to land on the moon.

The Queqiao is close to the Moon in a position that allows it to be in communication with Longjiang-2 and Chang-e-4 to send transmissions to Earth. For the above, during the landing mission on the moon the Longjiang-2 had to be disabled to avoid possible interference this could affect communications, and a few days ago it was activated again.

Longjiang-2 was not alone in lunar orbit, was monitored by the Longjiang-1 satellite, and their mission was to observe and explore the moon. During the past year, China had problems with Longjiang-1, which ended in a loss communications, so now the mission is only supported by Longjiang-2, which fortunately continues to operate smoothly.

The Longjiang-2 satellite already showed its capabilities with incredible photos of the Moon, but now, after its reactivation, on February 3 it made several photographs and "time lapses." The first photograph of these sequences was downloaded on 4 February by the Dwingeloo Observatory Radio in the Netherlands, which Show us the hidden side of the Moon in all its splendor with the company of our planet Earth.

As I mentioned this is the first photo that captures the hidden side of the Moon and Earth in a single shotand may be a preview of what's to come now that Longjiang-2 is taking pictures and videos again.