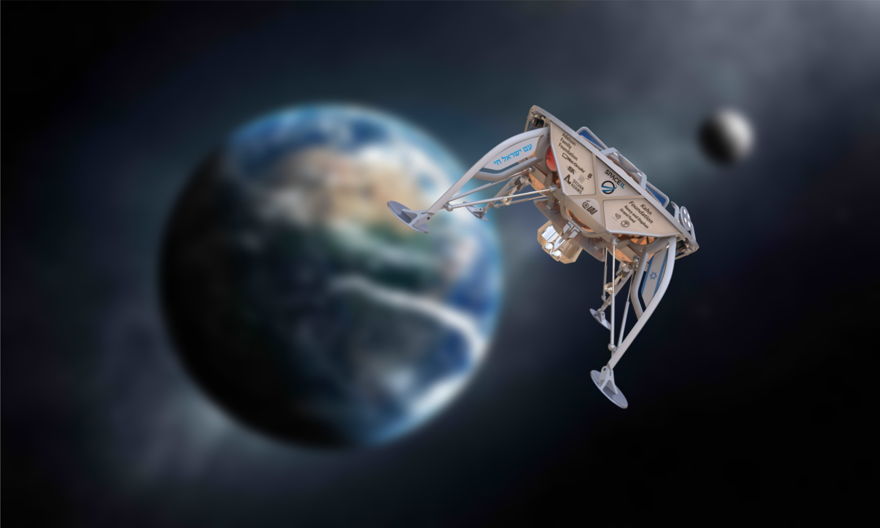 SpaceIL and Israel Aerospace Industries (IAI) engineering teams will hold tomorrow the most critical maneuver so far on the journey from Bereshit to the Moon.. The insertion of the lunar orbit, or "Moon Capture"As the maneuver is called, it allows the spacecraft to enter the moon's gravity and begin to orbit before it lands.

So far, Bereshit has circled the Earth in elliptical orbits and has made several maneuvers to send it farther and farther. Earlier this week, Bereshit passed its closest point to Earth for the last time, 1,700 kilometers (1,056 miles)and continued its meeting point with the Moon in a band of 400,000 kilometers (248,548 miles).

Unlike the maneuvers that Bereshit has made so far, when the engines were operated to accelerate the ship, the current operation of the engine is intended to decelerate the vessel to be captured by lunar gravity. Braking will reduce Bereshit's speed to the Moon from 8,500 km / h to 7,500 km / h.

If the deceleration is not carried out as planned, the ship risks leaving the gravity of the Earth as it loses the moon's gravity and enters a different and undesirable orbit in the solar system. That would put an end to the mission.

A successful maneuver will position the spacecraft in an elliptical orbit around the moon, where the nearest point (perilune) is 500 km (310 miles) from the moon, while the farthest (apolune) is 10,000 km (6,213 miles) away. In the week after the capture, the SpaceIl and IAI teams will perform various maneuvers to reduce the orbits around the moon from an elliptical orbit to a round 200 km (124 miles) above the moon. Unlike the long terrestrial orbits, the first lunar orbits last 14 hours. When Bereshit approaches the landing, each lunar orbit will last only two hours. These maneuvers are designed to lower the ship's altitude and reach the ideal spot for the stand-alone landing on the Sea of ​​Serenity on the night of April 11.

Bereshit went through two challenges, which the engineering team managed to overcome: one with its star trackers, who were blinded by the sun more than expected, and the other that involved unwanted restarting of the mission computer.

The Israeli ship Bereshit was launched for the moon in February 22 at 3:45 am, the time of Israel of Cape Canaveral, Fla., in a SpaceX Launchpad by a Falcon 9 rocket as a secondary charge along with two satellites. The first ship data was received at 4:23 p.m. and 4:25 p.m. Israeli time when Bereshit unfolded the landing legs as planned.

The launch of Bereshit was historic, becoming the first Israeli spacecraft to travel beyond Earth's orbit.

How it all began?

Although this is a national and historical achievement, it is based on a private initiative conceived by the SpaceIL three founders eight years ago, with two main objectives: to land an Israeli ship on the Moon and inspire younger generations to study science. and technology.

To realize your dream, young entrepreneurs Yariv Bash, Kfir Damari and Yehonatan Weintraub they have signed up for the Google Lunar XPRIZE Challenge. The competition ended without a winner in March 2018. However, SpaceIL announced that it would continue working on its mission.

The world's first spacecraft built on a nongovernmental mission

Since the establishment of SpaceIL, the task of landing an Israeli ship on the Moon has become a national project, but financed by donors, led by Morris Kahn. This is the spacecraft with the smallest budget to undertake such a mission. The superpowers that landed a spacecraft on the Moon spent hundreds of millions of dollars in government funds. The development and construction of the spacecraft with such a limited budget is a significant achievement for both the State of Israel and the global space industry. If the mission is successful, it will represent a technological advance on a global scale.

The importance of the project to the State of Israel

The landing of a spacecraft on the Moon will represent an extraordinary achievement for the small State of Israel. The project demonstrates Israel's technological capabilities and opens up many opportunities. They include the promotion of science education for the next generation: since its foundation, the NGO has met more than one million students across the country. Second, the mission will advance and promote science and research. Finally, it would open a new horizon for the Israeli economy and, thanks to its engineering knowledge and advanced development capabilities. Bereshit's success is a symbol of Israel's success in these and other fields.

The process of development and construction

The planning and development of the spacecraft included the intensive work of dozens of engineers, scientists and personnel. The development of SpaceIL and IAI began in 2015 and lasted until 2018. The spacecraft, which weighs only 600 kg, is considered the smallest to land on the moon. Bereshit is 1.5 meters high, about two meters wide and carries fuel that represents about 75% of its weight. Its top speed will reach 10 km per second (36,000 km / h or more than 22,300 miles per second).

The Israeli flag on the moon, a selfie and a scientific mission in conjunction with NASA through the Israeli Space Agency

When you land on the moon, the spacecraft carrying the flag of Israel will start taking pictures of the landing site and a selfie to prove that Israel landed on the moon. The ship has an important scientific mission to do: measuring the magnetic field of the moon as part of an experiment conducted in collaboration with the Weizmann Institute of Science in Israel. NASA also participates in the mission under an agreement signed with the Israeli Space Agency. NASA has installed a laser retroreflector in the spacecraft and will help communicate the spacecraft on the moon.

The Time Capsule: A Huge Database on Humanity

The spacecraft bears a time capsule: a huge database of hundreds of digital files They range from details about the NGO, the spacecraft and the project crew, national symbols, cultural articles and materials collected from the general public over the years that Beresheet put on the moon. The time capsule will remain on the moon even after the quest is complete.. As the ship is not expected to return to Earth, the information it carries is intended to remain on the Moon for an indefinite period and can be found and distributed by future generations.