Europe had concluded its Great War. England had ceased to be the great empire. And yet, in March 1919, two ships left the United Kingdom to colonize a new space. Nothing less than the Sun. His intellectual captain was an unknown Albert Einstein to the general public. This week, the whole world celebrates the 64th anniversary of his death with the umpteenth empirical recognition post mortem.

A huge donut in. A circle of fire like Johnny Cash. One eye of Sauron. The first real image of a black hole in a galaxy called M87 has[…]

Exactly 100 years after these ships embarked on a scientific expedition, Einstein shines again. And as if from the heavens a drop mic or any other meme, the pioneering image of a black hole comes to give reason for the umpteenth time. Though it was far from necessary. The first empirical evidence that gravity is nothing more than the product of the curvature of the cosmic tapestry we call space-time was another photo: that of an eclipse hunted on that voyage by the sea. A technical challenge at the height of the algorithm work of Katie Bauman, the young IT engineer who developed the code to rebuild the image that came to our M87 * black hole screens.

England and Cambridge, in particular, stood out for their advances in astronomy. In his observatory, there was a man terrified of the war and its aftermath. Quaker and pacifist, Arthur Eddington was one of the few who were really prepared to understand the theory of relativity. Theory which, by the way, contemplated the existence of black holes to the perplexity of Einstein himself.

This astronomer only needed an eclipse in order to empirically verify some of the consequences of the formulas of Einstein's theory. 1919 was a good year for that. An eclipse of the Sun would allow you to turn off your light to observe the stars. Specifically, a group in the Hyades, which according to relativistic predictions, should appear in an improper place in the sky, because the rays of its distant light would be diverted by solar gravity. His proposal earned him the reputation of being unpatriotic. With the wounds of war still pending, the still unknown Germanic theory of general relativity threatened the imperial reign of Sir Isaac Newton.

A storm and a war thwarted previous photos

Earlier, they had tried to prove Einstein's theory, published since 1907. In 1912, the sun set in Argentina. But a storm ruined the remark. In 1914, another opportunity emerges in the Crimea. The Berlin observatory, through Erwin Freundlich, contacted Einstein and came to install the equipment on the peninsula, along with a group of Americans led by engineer William Campbell.

Such bad luck had that the war exploded the 28 of July, while they put the cameras. Freundlich, German, was stopped by the Russians, who stayed with the teams. Campbell would not give up and try later in the United States. By the way, the day of the eclipse was also overcast, starting an epic bump with Einstein. 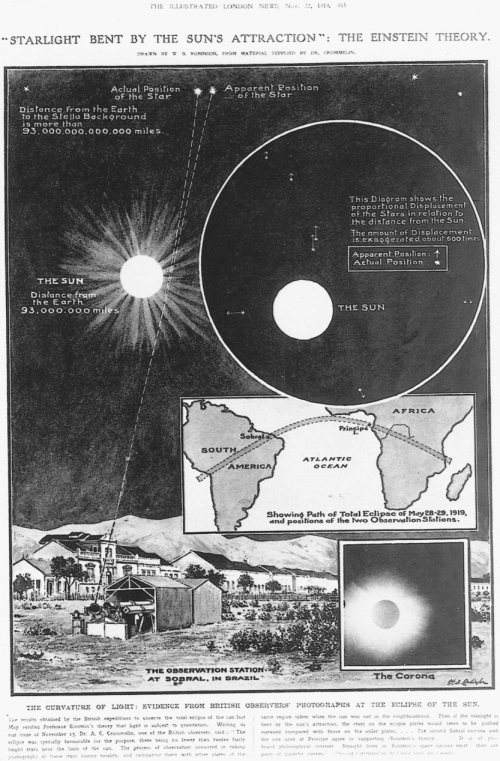 We have to wait until May 29, 1919, this is going to be 100 years ago now. Months earlier, Eddington published an article justifying the need to travel for the eclipse hunt with an expedition. It was the Royal Astronomical Society that organized them, emulating Darwin's voyage aboard the Beagle.

A first led by Charles Davidson, assistant to the Greenwich Observatory, left for Sobral on the Brazilian coast. The other, headed by Eddington himself, to Prince Island in the Gulf of Guinea. In particular, they planted their telescopes on a cocoa plantation.

Almost two months of preparation for something that would last only six minutes. A long eclipse for what are eclipses, which, however, would change the course of physics.

The stars are not where they should be

Keep in mind that the theory of relativity had many beautiful aspects. But for many it was an act of faith, between imagination and mathematical reversal. Others, directly, understood nothing. What became clear is that to take it seriously, empirical verification was necessary.

Einstein had spoken since 1905 about things like nothing can go faster than light. Such things on a train, both who enters as the train watches from outside, you will see that the light of a flashlight always goes at the same speed. This means that, from the outside, the very fast moving train is flattened. Things like the twin brother of an astronaut who travels very fast and far in space will return younger than the one waiting for him on Earth. Things like very massive objects, like planets or stars, curl everything around you, like creating a funnel that swallows the next things. Including light. And here is the key to what the eclipse could show: the sun, which is a huge mass, could divert the path of light from a distant star. Or what is the same, the Sun makes us see stars in places that do not belong to them.

The heat almost frustrates the photo.

May 29, 1919. The day is twisted Eddinton. Clouds appear in the sky. However, between them appears a sun that darkens. Get a dozen dishes. Anxious to know what had happened in Brazil, they soon discovered that they had taken 24 photographs with clear skies. Of course, the plan is almost spoiled. The tropical heat had bent the metal of the larger telescopes. All they had to do with another smaller reserve, only 10 cm.

I had to analyze and process the photos, as it happened now with the image of the black hole. Campbell, the American who traveled to the Crimea, was quick to say that the Einstein effect did not exist. And it was based on some blurred photos he had made in Washington, taking advantage of another previous eclipse in 1918. It is worth remembering that he took pictures with bad cameras, since the good ones were left by the Russians in the Crimea when the war began.

However, the reality was stubborn, much in spite of Campbell, in total conflict with the Germans. In September, Eddington published the scientific results. Of course, the Sun has diverted the light from other stars. They could see when they compared the photos with the image of the telescopes on the other side of the Atlantic, where it was at night.

From the eclipse to the black hole

In 2019, to compare, the technical challenge of hunting a black hole is monstrous, no doubt. But this image corroborates things more than known and proven by mathematical models and viewed by computer. In this case, the observation and images (in fact, they are millimeter radiations that the human eye can not perceive), it took a dozen days in April 2017. revealed or processed of all this is what cost about two years.

The 1919 photo was absolutely incredible to someone unfamiliar with the concepts of general relativity, published just four years earlier. The 2019 is quite similar to almost everything imagined by computer models and even cinema.

This is how the black hole was "photographed"

We have drawn black holes since 1972, first with numerical simulations and tiraline. In 1979, Jean-Pierre Luminet used an IBM 7040 to have enough data to manually fill a black hole with Indian ink. It is surprising that an old computer for time refined both its simulation and portrayed the black hole with such similarity to what we now know to be "real." Then came the informative representations in the form of gravitational lenses, jets and the mythical representation of Gargantua, the black hole of the interstellar film (Christopher Nolan, 2014), proposed by Nobel Kip Thorne. Why does not what we see now look exactly like this? In this video we explain what we stand for when we imagine a black hole. | Video: M.V.

The value of the curvature of the light was between 0.9 "and 1.8" of arc. However, it does not match what the theory predicts: 1.7. "In later reviews, Arthur set the deviation at 1.61", but with great uncertainties. Then, and ruling out the worst results, the figure was at 1.75. "For Einstein, this was already very close to the forecast, but the Americans did not want to acknowledge it.It could not be that Englishmen and Americans were allies to support a physicist that could change the laws of nature.

The United States remained suspicious but lost the battle of public opinion. From that moment, Einstein began to appear in the newspapers and in the radio. He was received as a true star in America. 20,000 people waited for him in the harbor as an idol. The hair and tongue scientist was born outside. The one that came to us like a pop icon that no one understood what he was saying.

Except Campbell, his rival, who already in 1922 admitted that the German was right. Unfortunately, years later, his name resounded in another war that was already brewing in a wounded and humiliated Germany. Relativity began to sound like atomic warfare. But that was definitely another battle. 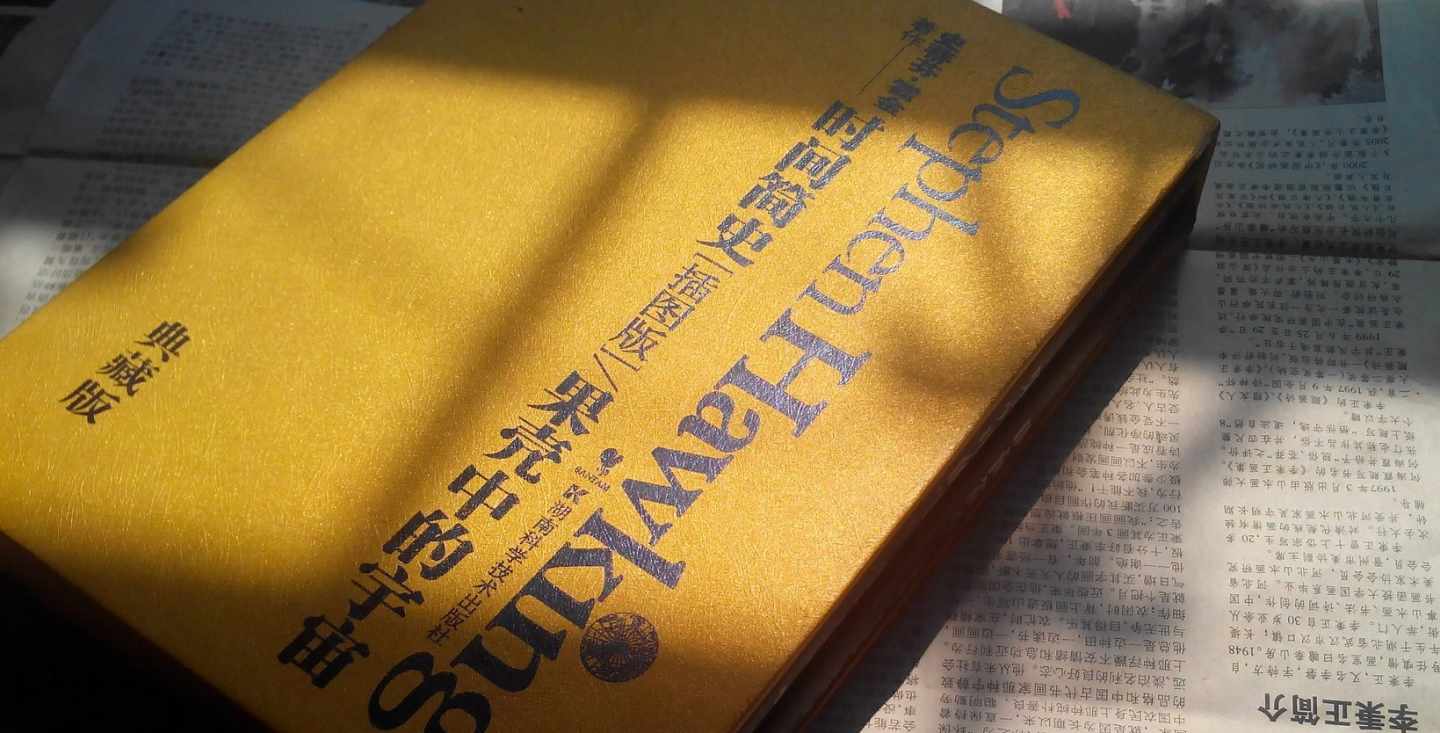 Chinese edition of A Brief History of Time & # 39; Pixabay

In his book History of time (1998), Stephen Hawking asserts that "it is ironic that a subsequent examination of the photographs taken by that expedition shows that the errors committed were as great as the effect being measured. Their measurements were either a case of luck or a case of knowledge of the desired result, which occurs relatively frequently with science. "

The theoretical physicist and disseminator did nothing but amplify a fraud that has no basis. In 1979, a new study was carried out which confirmed that the original plates did not deviate as much. In fact, as Professor Francis Villatoro recalls, "as early as 1919 its accuracy was comparable to that achieved with the eclipse of 1973. So the results of the 1919 eclipse confirmed Einstein's theory for more than five sigma. a scam ".

In the original article by Dyson, Eddington and Davidson, it was said that the more precise result, that of Sobral, was what confirmed Einstein's theory.