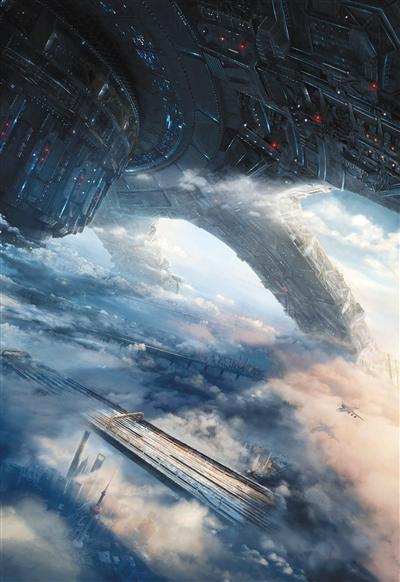 The device to push the Earth with a futuristic science fiction in the film.

Directed by Guo Fan, Wu Jing special starred in the science fiction film "The Wandering Earth" starring Qu Chuxiao, Li Guangjie, Wu Mengda and Zhao Jinmai, which was released nationwide on February 5. The film was adapted from the science fiction of the same name by Liu Cixin. The novel talks about the rapid aging of the sun, the earth is facing a desperate situation, and humans are turning to the "Wandering Earth" program for self-rescue to find new homes in space.

"Wandering Earth" is the first hard-core science fiction work in Chinese cinema, and director Guo Fan has revealed that the seeds of the science fiction film were buried five years ago. In 2014, the film department sent Guo Fan and several young directors to study in the United States to understand the difference between the film industry between China and the United States. A few years later, Xiao Yang, who went to the United States, filmed the second feature film "Weather Pre-Explosion", and "Crazy Alien" by Ning Hao, was released on New Year's Day. Lu Yang was filming "The Assassination of Novelists". Chen Sicheng is developing his "Chinatown Detective" series of the brand. "These directors are actually doing industrial exploitation." Guo Fan thinks the trip to the United States has laid a seed for everyone. Five years later, what Guo Fan is proud of is that this seed has finally sprouted, according to the number of people, "Wandering Earth" is 90% of the national team. According to special effects, three quarters is the national team, and the rest is The German and Korean teams are considered purely national films. The Beijing News reporter interviewed director Guo Fan and starred Qu Chuxiao to talk about the behind-the-scenes story of the science fiction film's creation.

Worldview has made over 3,000 concept maps

Before filming a science fiction movie, you must build a worldview, a very big project. Director Guo Fan has revealed that we must first find the context of building the world perspective, subdivide the social sciences and the natural sciences, and re-combine the relationship between human politics, economics and culture, and also check some historical data to see how set it up. What changes in the external changes that occur when the Earth moves away from the sun, including temperature, plates and ocean currents? And how does that change after the freeze, after the earth stops? These need to be considered. So the outer layer is the common world view, the relationship between the celestial bodies, the relationship between the earth and the moon, Jupiter and Mars. As Earth passed through the small belt of Kuiper, "Although we are far from this point, we already consider the belt of Kuiper." It is not enough to trust the words, but also to unify the ideas in those minds. According to Guo Fan, "as each person's brain occupies a different space, the most difficult is to visualize the world of imagination. We have done more than 3,000 conceptual maps."

Films involving space subjects should solve the problems of filming actors in the "no weight" state. In "Wandering Earth," there is a weightless astronaut game in outer space played by Wu Jing. Director Guo Fan said that this scene is a real shot and a CG synthesis. Basically, the dynamic part of Wu Jing floating in space is real. Photographed, this is done mainly by hanging Weiya. The team had to put a round ring on Wu Jing's waist and tie it on the WIA. When the WIA pulled, the ring could be rotated 360 degrees. "If it is just a normal Wia, Wu Jing has enough experience to overcome this, but Wu Jing is still wearing a space suit weighing about sixty or seventy pounds," said director Guo Fan, the clothes will get stuck everywhere. Especially uncomfortable, like tying clothes in the hospital, it's a very painful thing to put it on and then hang it.

Regarding the CG part, it is mainly used in large panoramas, using as reference the real characters, and replacing it with the full CG model, because the big picture can hardly see the face of the character, so the public can not say. Including the drama in the space station, the drama is very shot, the director is also the first real shot, can be used as a good reference after filming and then use the CG technology to synthesize, the degree of light matching and the whole scene will fit in well. . Director Guo Fan said that what is really difficult to do is the environment with which we are familiar.We can see at a glance where it is: "It is relatively easy for the space station to do so because the public is not familiar with the space station and the light source. "

New topics No experience in science fiction films in China

As it was the first time we experienced this type of science fiction film, director Guo Fan did not know how to name it in some departments during the filming process. The crew imported six hydraulic stems from Germany, which were used as a platform. Knowing what to call it in Chinese, is the electronic control gimbal platform. "In order to make the rescue car driven by the rescue team in the movie feel swaying, but it seems real, the whole car should be placed on a platform, but the platform has weight. Limited, the carrier uses foam to do this, because the foam is lighter, has no support and is looking for lighter aluminum material to wrap the car in, but this carrier made the crew difficult. "" We've been reworked several times. "Because we do not have experience, we also need to consider how many people in the actor are safe? When it comes to actual operation, how to set up the surrounding security? "All questions put before Guo Fan and the team are new topics.

The wireless network is also a new topic. When shooting in the shed, almost every department uses wireless, including the headset of the photography department, the wireless focus, the UI screen that controls all the wireless screens and the wireless actors. There are numerous wireless sources in the field that are "struggling" with each other. The exoskeleton armor used by the actor has a ring-shaped bulb that should have been a color, and the result often turns into a rainbow of flashes, like a neon. And this can not be controlled because it is a complete circuit system in New Zealand, there is no signal in the country, and there is no substitute, which can only be removed and replaced by other domestic ones, including some screens on the actor's arm. In fact, is to put a cell phone, this model of mobile phone can not be bought domestically, which makes the crew particularly in collapse.

Director Guo Fan: No, we designed the Spring Festival in the first half of 2016 when we started writing the screenplay. Because science fiction films give people a sense of cold, especially their outer environment and the setting of the dungeon, many viewers will not be familiar with this place. We want to find something that makes the public feel intimate and familiar when the audience is unfamiliar. The Spring Festival is a particularly good carrier that can bring people together.

Beijing News: "Wandering Earth" is the first hard-core science fiction film produced in China. Does the government department have some support policies?

Guo Fan: From department to ministry, we have a lot of help and there is great recognition. The prize issued by the birô is the dragon brand of 001 of 2019. In fact, it represents a kind of recognition, and it is also a great incentive for us.

Beijing News: How do you feel about the protective clothing you wear?

Starring Qu Chuxiao: I just want to wait for the movie to be released before talking about how this dress is uncomfortable, but I do not think there is something to say now because you can not perceive the feeling but it is very emotional. . This dress is a whole body, thick and not breathable, there is a mouth in the sleeves of the whole body, and there is also a sealed glove. When you breathe, a mixture of gas and body fluid flows into the helmet from the bottom up. This strange scent circulates on all parts of the body. Clothes and gloves are old, can not be washed, have flavor, can only be dried every day and placed under the sun to dry. When the director sleeps while resting, we take the gloves off and swing in front of the nose, and he will wake up at once.