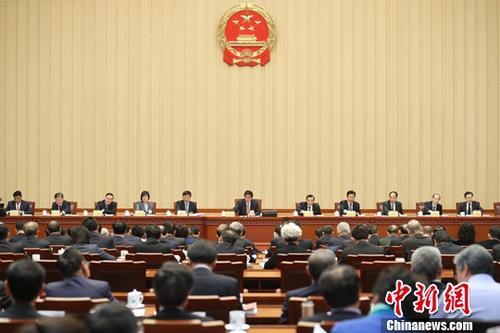 The meeting of the Standing Committee of the National People's Congress will be held today to review the foreign investment bill, etc.

Chinanews.com client Beijing, January 29 According to previously announced news, the eighth session of the Standing Committee of the 13th National People's Congress will be held in Beijing from 29 to 30. According to the recommendations of the previous meeting of the president, the meeting will review the foreign investment bill and related appointments and dismissals.

As one of the topics of the meeting of the NPC Standing Committee, the foreign investment bill has undoubtedly received much attention from society.

At the 7th meeting of the Standing Committee of the 13th National People's Congress, Justice Minister Fu Zhenghua stressed in his explanation that since reform and opening up, China has formed a Sino-foreign joint venture law, foreign business law and Sino-foreign cooperative law. The legal system of foreign investment, which is mainly based on the "three foreign laws", provides effective legal protection for the opening up to the outside world and the active use of foreign capital.

The data show that in October 2018 there were about 950,000 overseas invested enterprises in China, and the actual use of foreign capital amounted to more than $ 2.1 trillion. Foreign investment has become an important force to promote economic and social development.

At the same time, Fu Zhenghua also mentioned some of the challenges encountered in the "three foreign laws".

In terms of content, according to media reports, the draft Foreign Investment Law aims to establish the corresponding systems necessary for the promotion, protection and management of foreign investment, including:

The first draft of the bill stipulates that the state adheres to the basic national policy of opening up to the outside world, encourages foreign investors to invest in China and raises the quality and level of foreign capital utilization. The state implements a policy of liberalization and facilitation of high-level investments, establishes and enhances mechanisms to promote foreign investment and creates a stable, transparent and predictable investment environment.

At the same time, the bill clarifies that local peoples' governments at all levels and their relevant departments must strictly adhere to commitments made with foreign investors and foreign investment firms in accordance with the law and various types of contracts entered into in accordance with law. If the interests of the State or the public social interests need to change the political commitments or the contractual agreements, they must be executed in strict accordance with the statutory authority and procedures, and compensate foreign investors and companies invested abroad for the losses suffered by agreement with the law. (End)