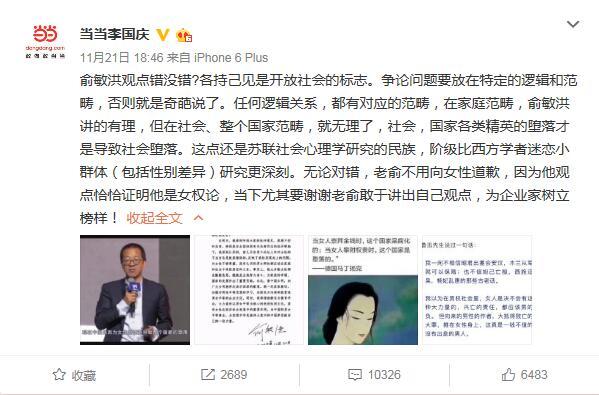 At the 2018 Learning Conference, held Nov. 18, Yu Minhong said in a speech, "The standard for Chinese women to choose men is that men will make money. As for consciousness, no matter what, the fall of Chinese women led to the fall of the country. "

As soon as this statement was released, immediately many celebrities and Internet users were dissatisfied with the Internet. The Guangming Daily also commented that Yu Minhong's so-called "dropped vision" is actually a replica of the old "red-faced water" theory.

On the evening of the 18th, Yu Minhong clarified that when he explained the argument that "the direction of measurement determines the direction of education," he used the pattern of women to find a man as an example. Because he did not express well, he caused a misunderstanding of netizens and apologized. .

However, Yu Nehong's apology to Yu Minhong did not buy him, saying he was "more and more black".

To this end, Yu Minhong made a special trip to the Women's Federation of China on the 20th and apologized to his compatriots.

On March 21, Sheng Xitai, the founder of the Hongtai Fund and former president of Huatai Securities, publicly supported Yu Minhong, a longtime friend. He said that Hong Ge (Yu Minhong) pays special attention and supports female entrepreneurship. He once said that the tenacity of entrepreneurial women is no worse than that of men, not to mention their strong communication skills, and their meticulous attitude towards projects, industries, customers and even employees. The quality of being a leader in competition with male entrepreneurs.

Hong Tai, which was jointly built by Sheng Xitai and Yu Minhong, has invested in many projects related to women, such as Tingting Chinese ancient singing, a project with a valuation of more than 100 million, a great mother who wants to compose the baby with the heart. Singing old songs, another example is culture, which is a company that integrates marketing through variety shows. "The" Goddess New Clothes "produced by them invites actresses and fashion designers to design garments around the theme in each edition.Now, clothing sales are hundreds of millions.There are other items such as black dress and a small stew of Wait a minute, let alone how many of our portfolios are female CEOs.

On the evening of the 21st, Li Guoqing reaffirmed Yu Minhong through Weibo and pointed out that "Yu Minhong's point of view is wrong.Every opinion is a sign of open society.Whatever right or wrong, Lao Yu need not apologize to the women because their opinions only prove that he is a feminist. On the other hand, I would like to thank Lao Yu for daring to talk about their own views and set an example for entrepreneurs. "(Zhongxin Jingwei APP)Go back to Sohu and see more