The performance of the great white horse is also thunder!in

On January 29, China Life released its 2018 performance forecast, claiming that the company's net income attributable to equity holders in 2018 was reduced by approximately 16,216 billion yuan to 22,777 billion yuan as of 2017, a decline of approximately 50% to 70%.

For the reason of the decline in performance, China Life explained in the announcement that the main reason was that the general stock market volatility was affected by the downward trend. 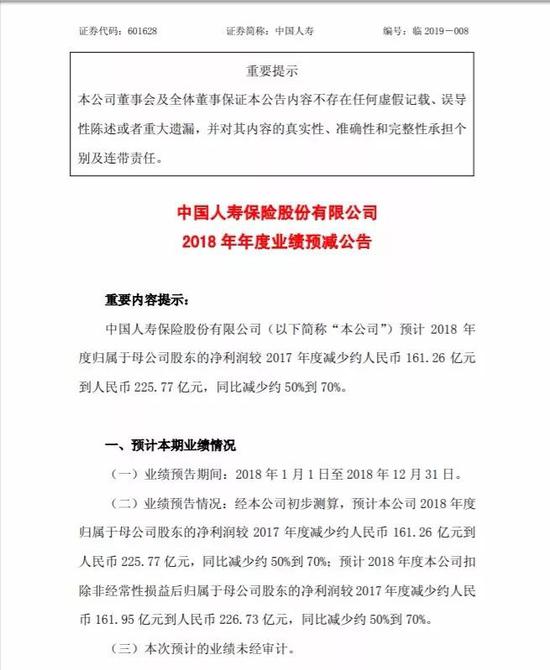 As shares of company A enter the annual reporting season, a number of stocks have recently exploded, including shares of White Horse.

China National Travel ServiceLast week released the performance report for 2018, net profit was significantly lower than expected;Kangmei Pharmaceutical(Rights of the defense) At the end of last year, the Securities and Futures Commission was investigated by the Securities and Futures Commission for violation of laws and regulations: Kangdexin started the first major thunder of the New Year bond market;Sanan OptoelectronicsBecause financial data is widely questioned by the market.

In the first half of 2018, China Life's revenue and net income are still growing normally. The sharp decline in China Life's net profit from the second half of 2018 was mainly due to the loss of capital investment.

China Life's third quarterly report showed operating profit in the first three quarters was 541 billion yuan, down 1.2% year on year, and net income at home was 19.869 billion yuan, down 25, 9% in relation to the previous year. Affected by the continued decline in the capital market, China Life achieved an investment income of 83.87 billion yuan in the first three quarters, down 15.54% over the previous year.

In the first three quarters, China Life's total investment return rate was 3.32%, down 1.80 percentage points from the previous year, and net investment income was 4.60%, decrease of 0.39 percentage point in relation to the previous year. As of the end of the third quarter, China Life's investment assets were 2.79 trillion yuan and total assets reached 3.12 trillion yuan, up 7.6% from the end of 2017.

Wanlian Securities Yu Gang believes that the decline in China Life's net profit is mainly due to increased capital market fluctuations and asset impairment. On the one hand, the stock market in the third quarter of 2018 is still slow.Shanghai and Shenzhen 300 IndexThe decline of a quarter of 2.05% led to an additional decline in the company's total investment income to 3.32% from the first half of the year, down 1.8 percentage points year-on-year. On the other hand, the impairment loss for the first three quarters was 5.6 billion yuan, a substantial increase of 155.6% over the previous year. Although China Life's actuarial assumptions, such as the discount rate, increased pretax profit by 4.235 billion yuan in the first three quarters, the reduction in investment income and asset losses increased significantly, resulting in a net profit of only 19.869 billion yuan, down 25.9%. %.

Judging by the holdings of China Life's two main products in the third quarter in the fourth quarter of 2018, the stock market crashed due to the slowdown in the market.

By 2019, some insurers believe that, on the one hand, they will increase their investment in stocks to reduce non-standard investment and, on the other, allocate inventories. In the first quarter, there will be a gradual recovery in improving risk appetite. Downside risks, the third quarter began to pay attention to the wave of the stage of economic stabilization and recovery.

China Life Insurance 2019 labor conference pointed out that as of the end of 2018, China Life Group's total consolidated assets of nearly 4 trillion yuan, up 10.85% compared to the beginning of the year, combined revenue of 646.7 billion yuan.

Wang Bin, secretary of the Party Committee and chairman of China Life Insurance Group, said that in 2019 China Life Insurance will determine "three shifts, four types and three ways", accelerate the "three major transformations" and adopt a deployment strategic "two-step" strategy. The first step is to use one to two years to understand the strategic layout, the second step is to complete the international financial insurance group in two or three years.

Wang Bin said that as of the end of 2018, the operating conditions of its subsidiaries remained stable, and revenue increased 4.7% over the previous year, and market share rebounded to 20.4%. asset assets company at the end of the year exceeded 3 trillion. Yuan, the insurance company owned premiums of 69.1 billion yuan, pension insurance company management assets exceeded 700 billion yuan, continue to maintain the industry first, third-party assets management group reached 989.9 billion yuan.

For the main working arrangements in 2019, Wang Bin pointed out that the insurance industry should balance the relationship between efficiency and scale and adhere to the organic development of efficiency and scale, the investment industry should focus on the rate of profit and strive to achieve the contribution of profit to the group and the company's market. The "double promotion" of the ranking insists on meeting the national strategy, the banking sector should actively develop inclusive financing, optimize the business structure, deepen the synergy between bancassurance and consolidate the management foundation.