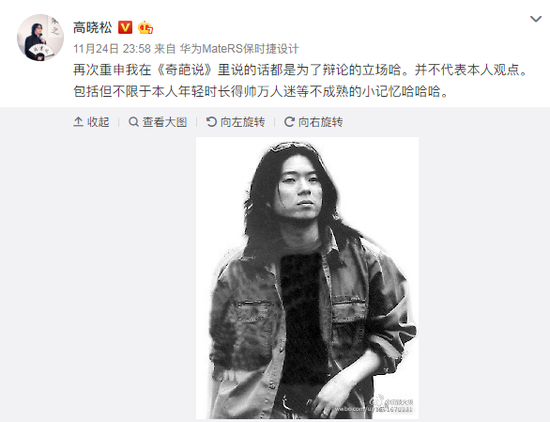 Netease Entertainment reported on November 25 Recently, Gao Xiaosong said in his "Qi Yu said" that he is very similar to Wu Yifan, causing netizens to discuss. Later, Gao Xiaosong sent Weibo: "The words spoken in" Qi Yu Suo "are all for the purpose of debating and do not represent my own views, including but not limited to my small and immature long-term memories, geeks , etc. Ah!

Gao Xiaosong claimed to be like Wu Yifan, and some netizens spit it out: this is the worst blackout of Wu Yifan, but some netizens ridicule Wu Yifan: "You will become him when you grow up."

Gao Xiaosong replied to the self-proclaimed Wu Yifan Wu Yifan naughty reply Gao Xiaosong sent this microblog "enlightenment" but also with his beautiful photos when he was young. Wu Yifan replied: How do you have my picture?