A shares outside the US curse stocks, the Shanghai stock index has lost 2500 points – Chinanews

Shares traded off the US stock market, and the Shanghai stock index lost 2,500 points.
in

US stocks plummeted on Christmas Eve, and the top three indexes fell in unison, Shanghai and Shenzhen stock markets rebounded. As of the close, the Shanghai Composite Index fell 0.88% to close at 2,004 points. 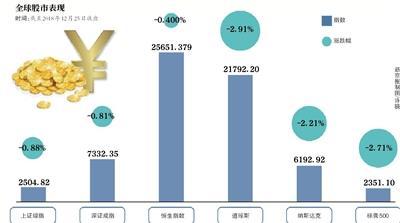 In terms of sectors, weights performed poorly, 5G conceptual stocks were sought by the market, and more than ten stocks such as Zhongfutong and Dongfang Communications increased, and venture capital stocks in late both Tongxing Lixing and Dianguang Media closed their daily limits. The new Taiyong Long March faucet has six planks, and the trend of the "sky floor" appeared the same day. Overall, the 5G shipping and airport sectors were among the biggest winners: brokers, oil services and Hainan sectors were among the biggest losers.

The US Treasury secretary rescued the market with little effect, and the value of the US stock market fell more than $ 4.5 trillion.

In the news, the biggest negative interest of the day was that US stocks fell sharply last night. On December 25, Beijing time, the US financial market was not "safe." The Dow Jones fell more than 650 points, falling below the 22,000 mark. The S & P 500 index was higher than the year high. The accumulated decline has surpassed 20% and is caught up in the city of bears. Trump once again bombarded the Fed, calling it the only problem in the US economy.

"US stocks showed a continuing downward trend in the near future." The official US Treasury website posted news and Mnuchin's Twitter link. Mnuchin's statement on the Finance Ministry spelled out on Twitter that Treasury Secretary Mnuchin and the United States The big banks – Bank of America, Citigroup, Goldman Sachs, JP Morgan, Morgan Stanley and Wells Fargo CEOs – had a dialogue. Mnuchin assured them that if the market of US stocks continue to fall on Monday, this will give them sufficient liquidity support.

Although the US Treasury Secretary took the lead in setting up a "rescue team" to cheer the market, that still did not stop the US stock market falling sharply on Monday. On December 25, Beijing time on the eve of Christmas Eve in the United States, the market expected Christmas market not only did not come, but marked a sharp decline.

The bottom of the fund, 5G, venture capital industry is sought by funds

However, the panic market sentiment declined in the afternoon, market sentiment warmed up, the popular action Tailong left the trend of the "sky floor", harvested six consecutive boards in the afternoon, the 5G sector accelerated the tide to the late and the venture capital stocks were again active. The Central Economic Work Conference was held in Beijing from December 19 to 21, 2007. The meeting identified seven key points for the economic work to be achieved in 2019. Among them, the second important paper stated that "it is necessary to perform a role in investment and accelerate the commercialization of 5G. Steps to strengthen the construction of new infrastructures such as artificial intelligence, industrial Internet and Internet of Things. "Market participants believe that the current communications industry is entering a period of adjustment, and in the short term, this heavyweight policy Can boost market sentiment.

Yang Delong, chief economist at Qianhai Kaiyuan, believes that the A-share market trend is more determined by domestic economic policies and liquidity. The foreign market does not have much impact on the medium- and long-term trend of the stock market. Historically, the correlation between A shares and developed market trends is low and will not be affected by the long-term impact of the external market.

In addition, A shares were successfully merged into the MSCI Emerging Markets Index and the FTSE Russell International Index this year. The A share allocation value is constantly improving. For many hedge funds, their performance benchmarks are the two major international indices, so after the A shares to be included in these two indices, the allocation of foreign shares to A shares is required to increase accordingly, the continuous flow of foreign capital A. The second plea.

Yang Delong believes that the current market trend is still dominated by shocks and lows, and a good recovery will occur after market confidence rebounds.

From the change in Facebook stock price, after experiencing a 6% decline last Friday, the first day of Facebook's trading, Facebook rose 3%, but the US stock market as a whole fell, Facebook fell 0.71% on the day. China Construction hit a new low of $ 123.02 per share next year, down 43.45 percent from a year-earlier high of $ 218.62.

This year, Facebook was also exposed to several user data breaches, causing market doubts. In the second quarter of this year, Facebook's earnings report did not meet market expectations and the company's share price plummeted 19%. Affected by this, Zuckerberg's net assets evaporated $ 18.7 billion in the year and net assets fell to $ 52.5 billion.

Another well-known company, Netflix, also suffered a sharp drop in stock prices. On Monday's trading session, Netflix fell 5.08% to $ 233.88 a share, compared with the June high of $ 423,206 , the accumulated fall of 45%. That also reduced the wealth of Neifei founder Reed Hastings to $ 2.6 billion.

To keep up with the market, Goldman Sachs pointed out in the report released in 2019 that, in general, the US stock market will continue next year, but over time the market may become more turbulent as investors begin to worry about the American economy. It will fall into recession in 2020.

The investment bank expects the S & P 500 to reach 3,000 points by the end of 2019 and the total return on the stock market to reach 7%. At the same time, given the uncertainty faced by US stocks next year, Goldman Sachs believes investors need to consider increasing defensive stocks, over-allocating stocks of utilities, communications service stocks, and technology sectors information, non-essential consumer goods inventories, industrial stocks, raw materials and real estate.