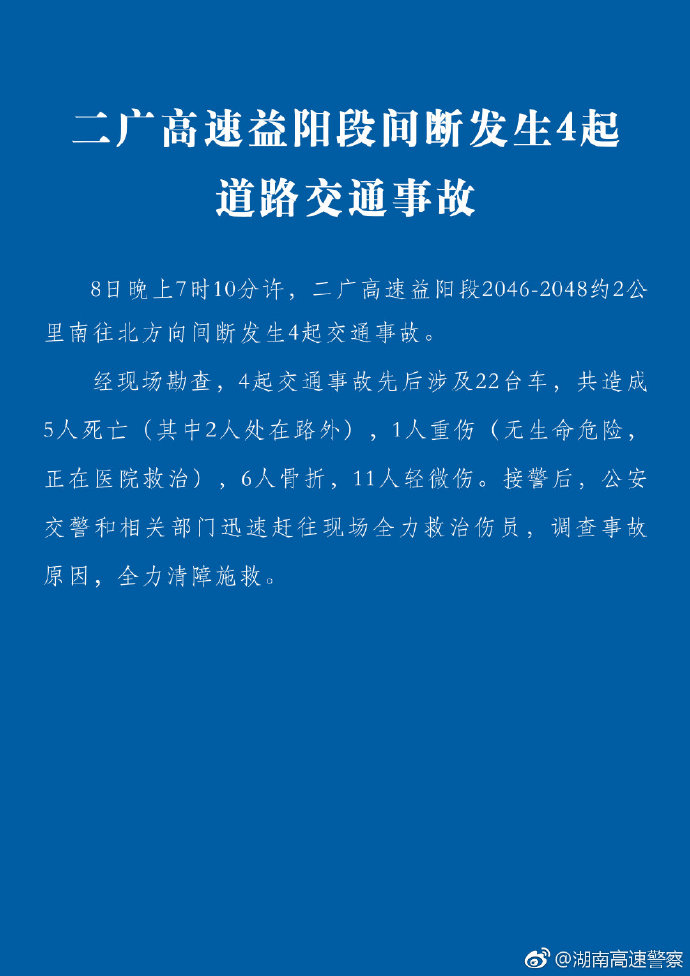 At 00:50 on the 9th, the official announcement by the Hunan Provincial Expressway Traffic Police Department said that at 19:10 on the 8th there were 4 traffic accidents in the south and north of the Yiyang section of the Second Expressway Guangzhou, 2046 -2048. .

According to the report, after the on-spot investigation, 4 traffic accidents involved 22 vehicles, resulting in 5 deaths (two of them were off-road), 1 serious injury (no life-threatening, hospital treatment), 6 fractures, 11 A minor injury. After receiving the police, the police traffic police and relevant departments quickly rushed to the scene to rescue the injured, investigate the cause of the accident and rescue the obstacles.

On December 8, a traffic accident occurred in 2046km (northbound) in the Yiyang section of the Erguang Expressway, and traffic on the site was halted. Some nearby villagers photographed the moment the vehicle was out of control and the screams were constantly on the scene.

According to @ 湖南 高速 notícias news at 8:37 pm on December 8, the 2046km (north) section of the Yiyang section of the Erguang expressway was rescued due to the accident. Traffic on the scene was interrupted. Majitang, Changtang and Xianxi. Temporary traffic control is implemented at the Meicheng, Fukou and Longtang toll stations, and vehicles can only enter. Ask the driver's friend to plan the detour route in advance.