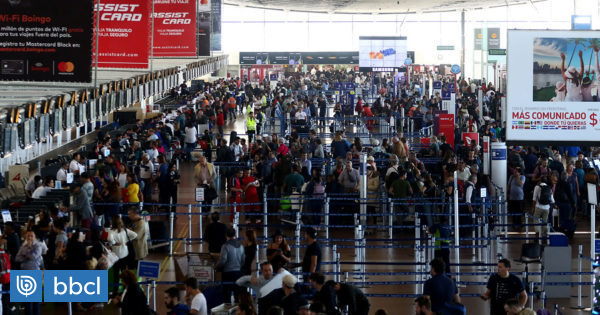 On Monday, the Minister of Economy, Development and Tourism, José Ramón Valente, announced a new reduction of air shipment fees, which was already programmed.

The measure, which will affect domestic and international flights, will take effect since July 2019: in high season.

The further reduction will additional reduction of 10% in the cost of current boarding fees for domestic flights, will fall 3.8% in the case of international flights.

This, added to the reduction of October 2018, which included 20% in domestic travel and 13% in foreigners.

"We are making progress in the democratization of the skies of Chile, with a measure that is a direct relief to more than 24 million passengers of our country, generating more competition so that prices fall even more, "said Valente.

Between October 2018, after the first abatement, and February 2019, the prices of air transport fell by 20%or, according to data from the National Statistics Institute (INE).

In addition, between November 2018 and January 2019, passengers transported on domestic flights rose 19% in relation to the same period of the previous year, according to the Civil Aviation Council (JAC).

By 2020, the Ministry of Economy reduce – in total – 40% of national shipping fees, through this gradual decrease.

How does the discount work?

For those domestic and international flights less than 500 kilometers, the 10% discount will apply, while the international tours within 500 km 3.8% will be subtracted.

As a reference, a domestic flight at first-class airports (such as Arturo Merino Benitez Airport in Santiago, or El Tepual in Puerto Montt) currently has a boarding fee of $ 6,092. While a similar flight at a second airport (such as the Maria Dolores Aerodrome, Los Angeles), is at $ 4,644.

However, it must be borne in mind that Boarding fees are adjusted quarterly in accordance with the Consumer Price Index (IPC), by the Directorate General of Civil Aeronautics (DGAC).

In view of this, it is necessary to mention that the next readjustment will be applied soon: first days of April, then the previous values ​​are only referential.