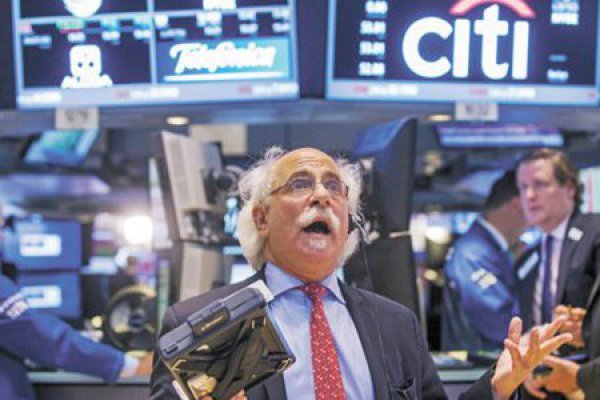 The S & P 500 was on the brink of the "bearish market," after hoarding a 19.8% decline from its peak in September. The index completes four consecutive falls of more than 1.5%, which has not happened since August 2015.

A few hours after the Christmas holiday, the spirit in the markets was not at all a celebration, but on the contrary. After the stock markets of Europe fell mainly driven by the retail and banking sectors, in the United States, the main indexes have fallen to the lowest since April 2017.

The overall index, therefore, fell 19.8% from the September peak, and completed four consecutive falls of more than 1.5%, something that had not occurred since August 2015. ANDThe technology Nasdaq, in turn, fell 2.21%.

In the midst of the general decline, President Trump again directed his darts against the Federal Reserve, blaming the US central bank for the setbacks in New York, deepening the declines.

"The only problem with our economy is the Fed. They do not understand the sentiment of the markets., do not understand the need for trade war or a strong dollar or even the shutdown "The Fed is like a mighty golfer who can not score because he does not have the ring," the Democratic president said to the border, "Trump said in his Twitter account on Monday.

Tensions remain despite US Treasury Secretary Steven Mnuchin's departure this morning to try to reassure markets after consulting the six major Wall Street banks on their liquidity levels. The authority also convened an emergency meeting with key financial regulators. Sources that had access to the meeting They point out that regulators have informed the authority that they see nothing out of the ordinary that is affecting markets.

Although it was a special day, with an early closing for Christmas, transaction volumes were 41% higher than the moving average of the last 30 sessions.

"It's the fault of the Panic Sales, emotion, whatever, when the negative momentum begins, there is not much that can be done, "Frank Cappelleri, Instinet's senior trader, told Bloomberg.

Trump's comments come to heighten tension after it transpired over the weekend that the president assessed to remove Fed chairman Jerome Powell, due to discrepancies in the management of monetary policy.

In addition, concern grows as the US third day of a shutdown or closure of government, in the midst of a struggle between Trump and the Democrats for funding its wall on the Mexican border. Observers from the US capital are beginning to believe that the shutdown could extend to the end of the year.

"The reality is that there is a huge amount of impedability "said Chad Morganlander, portfolio manager at Washington Crossing Advisors. This is combined with pressures on global growth and the end of the stimulus.

In Europe, The Stoxx Europe 600 regional index fell 0.4% amid concerns about interest rates and growth. The main losses affected the HSBC bank, which lost 1.0%, while the LVMH luxury goods brand fell 1.2%.

European equity markets are on track for their worst year since the financial crisis of 2008.

In Chile, however, the IPSA was coupled to the external climate, and closed the session with a fall of 0.64%.