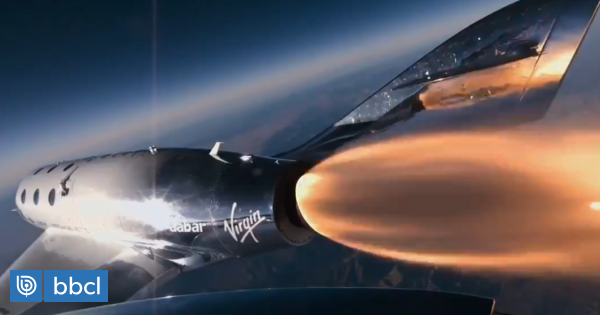 A rocket of Virgin Galactic with two pilots on board, flew higher than ever before, surpassing what the US Army considers the boundaries of space and becoming the first manned flight since 2011 that leaves the American soil.

The United States has not sent anyone into space since its territory since the shutdown of the space shuttle program NASA in 2011, and uses the Russian Soyuz rockets to take the astronauts to the International Space Station (ISS).

Since then, private companies trying to build vehicles capable of sending astronauts into space are waging a commercial battle.

In this showdown, Virgin Galactic crossed an important stage Thursday when its VSS Unity device managed to reach a height of 82.7 kilometers.

VSS Unity did not take off directly from the Earth, was transported by a cargo plane that left the "spaceport" of Mojave, California, and, after being released, its two pilots on board turned on the engine and made the journey to the sky to get altitude.

The space border is generally believed to be 100 km away, but the US Army estimates it is a bit lower, about 80.4 km, while passenger planes fly about 10 km in altitude .

This flight is an exceptional victory for this space society founded by the British Richard Branson, who strives to send tourists to space for a price of 250,000 dollars (170 million Chilean pesos) headquarters. More than 600 customers have already paid the price.

Branson, who had previously stated on CNN in November that he hoped to see his pilots arrive in space "before Christmas," wrote on Thursday in a statement: "Today, for the first time in history, a manned ship built to transport private passengers, arrived in space ".

"It's a crucial day, and I could not be prouder of our teams that have opened a new chapter in space exploration," he added.

"Congratulations to @VirginGalactic for the success of the SpaceShipTwo flight to suborbital space with four shipments of @NASA_Technology on board," NASA said on Twitter.

Congratulations to @VirginGalactic in SpaceShipTwo flying successfully into suborbital space with our four @NASA_Technology payloads on board. With a good rocket engine firing, the mission went beyond the 50 mile high target. Learn more about our onboard technology: https://t.co/CnVFu1eSQz https://t.co/D1AhE1Uzxm

Last July, VSS Unity reached 52 km in the part of the atmosphere called the mesosphere, in addition to the stratosphere.

Another US company, more discreet than Virgin, is well positioned to become the first to send passengers to space: Blue Origin, founded by millionaire Jeff Bezos, owner of Amazon, but it seems that he decided to do it with a small rocket.

The date of Virgin Galactic's first commercial flight was postponed several times, mainly due to the life-threatening accident of a co-pilot on a test flight in 2014.

"What we witness today is the most convincing evidence that commercial space is destined to become one of the 21st century defining industries," said George Whitesides, president of Virgin Galactic and The Spaceship Company.