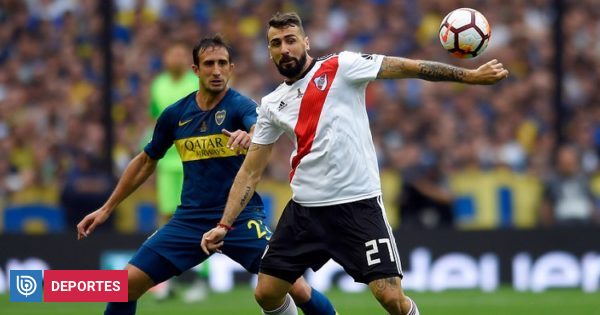 10,000 kilometers from Buenos Aires and under unusual security measures, River Plate and Boca Juniors will play on Sunday at 16:30 in Madrid the result of the Copa Libertadores, a contest that was supposed to be "the end of the century" and ended up contaminated by violence.

Far is the first Bombonera game November 11, settled down with a tight 2-2and even the return November 24 at Monumental, when a group of River fans attacked the Boca bus and the final was postponed.

With River claiming to maintain the locality and Boca demanding in vain the disqualification of the rival, Conmebol chose to take the continent the final between two historical rivals born in the same neighborhood of Buenos Aires.

Will be remembered "As the tremendous shame of Argentine football", River Plate chairman Rodolfo D Onofrio lamented in an interview on Friday in the Spanish newspaper El País.

On the other hand, Boca went to the Court of Arbitration for Sport (TAS) to suspend the game, but his request was dismissed, according to a statement on Saturday of this body, which will study the case later.

The stage of the final will be the emblematic Santiago Bernabeu stadium of Real Madrid, which will host millionaires and xeneize fans from around the world at its 81,000 seats.

Spain has the largest colony of Argentines abroad and has good air connectivity with Latin America, but it is also the country from which the "Libertadores" gave its name to the competition.

"Now it's the Conquerors Cup of America", lamented AFP Roby Cozzi, a xeneize fan of Barcelona, ​​who, however, will move to Madrid for the game.

Like him, tens of thousands of Argentines will go to the Spanish capital to witness the meeting. The 40 thousand tickets offered to Argentines abroad had a strong demand.

In contrast, of the 10,000 tickets reserved for fans in the country, there were still more than 4,000 to sell on Friday before the high cost of the trip – more than 2,000 euros just for the flight – unacceptable to many in the face of Argentina's delicate economic situation.

The safety feature will be exceptional: more than 4,000 police officers and private security agents, a superior display than the final of the 2010 Champions League at the Bernabeu.

In theory, the two fans should not cross: they were activated two fan-zones separated by 2 km to the north and south of the stadium, will be located in opposing stands and will have different areas to celebrate the title.

Special attention will deserve the "courageous bars": authorities expect the arrival of 400 to 500 especially violent fans. Some will be immediately deported as happened on Thursday with a Boca follower.

With all its risk, the competition will be an opportunity for Spain to claim the World Cup in 2030, for which it wants a joint bid with Portugal and Morocco, to compete with that of Argentina, Uruguay and Paraguay.

"Let's make the party in peace," titled on Saturday, the leading Spanish sports newspaper Marca, with a picture of fans of Boca and Rio embraced.

Clubs from both clubs in Spain are asking for calm: "You do not have to kill anyone to wear a different shirt," said Martin Barbaglia of the River Plate Barcelona subsidiary.

Mobilized en masse to a party they did not expect to enjoy, they both try to take the breath of Monumental and Bombonera to the Bernabeu, which should be dyed white and red and yellow and blue.

In an atypical setting and four weeks after the first match, teams set up in Madrid since midweek will have to struggle to focus on the game.

At stake is the South American scepter -that would be the seventh for Boca, on the verge of equaling the Independiente as the most prized, or the room for the River Plate- and participation in Club World Cup from 12 to 22 December in the United Arab Emirates along with his current host, Real Madrid.

The exciting game of the first leg has left a completely open result, especially considering that the goals away from home are not double value in case of a tie and that the ground is neutral.

And with so much at stake, Boca's coach Guillermo Barros warned the fans: "I do not think it will be a very attractive game in the visual, (but) a very tight game, very caught."