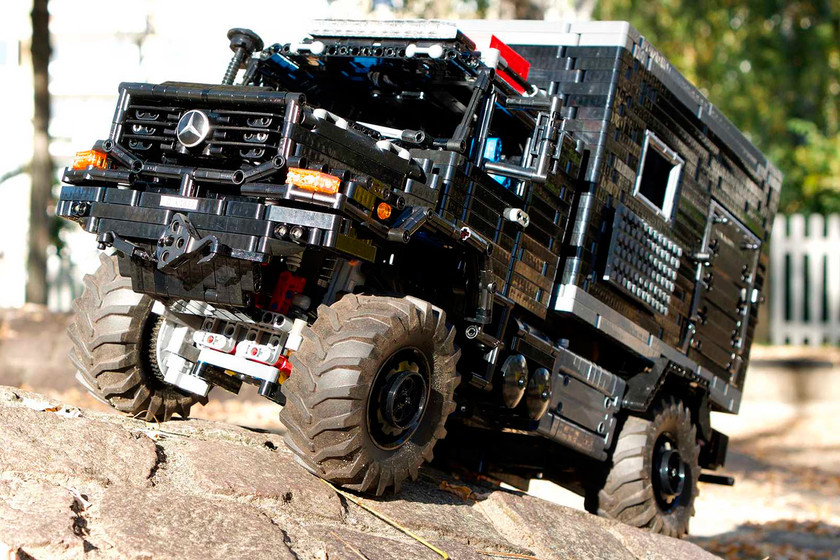 You will not find it in the catalog LEGO Technic, but it certainly could be. It is a LEGO MOC, acronyms born of the terms My Own Creation, that is, a own creation of LEGO pieces for whose construction only the imagination of the creator is applied. And LC-jrx has a lot: even the smallest details have been solved in this Mercedes-Benz Zetros 1833.

This YouTube user usually climbs your own LEGO creations for your channel and has many examples. The last to arrive was this Mercedes-Benz truck, which & # 39; through parts to turn it into a recreational vehicle. And nothing has to envy the Porsche 911 GT3 RS or the Bugatti Chiron that sells the brand of construction toys.

It took about a month for LC-jrx to conceive its own vision of Mercedes-Benz Zetros 1833 but unfortunately does not reveal the exact number of parts used in the model (in the video specifies several thousand). The structure is also accompanied by a total of eight electric motors that move the vehicle itself and the many devices that it includes.

Do not miss this Mercedes-Benz Zetros 1833 converted into recreational vehicle, aesthetically and dynamically. Its four wheels move independently thanks to four engines associated with each one. In addition, it has real lighting thanks to 14 LEDs distributed between the front and rear optics, including the ceiling and the direction signs.

He also has gearbox with reducer included and an off-road suspension consisting of four shock absorbers per wheel on the rear axle and two on the front axle. The steering, in turn, is driven by a servomotor.

The cabin has two seats, while accessing the box, a ladder is automatically deployed. Inside we also find a small sink with shower although the space is quite small, because it hides a compartment in the back transport a quad, also designed by the LC-jrx and which automatically descends from the casing by means of electrically driven pulleys.

Where they should go the fuel tanks are hidden two batteries with 6 AA batteries each one, which powers the lighting system and the motors with electricity. And there is more, because it also has an awning, which is also deployed autonomously, in the style of caravans, to enjoy the outdoors safe from the sun or rain.

To the delight of fans of this type of construction, the LC-jrx includes the instructions to bring this self-made LEGO to life. That makes you want it to be real, right?