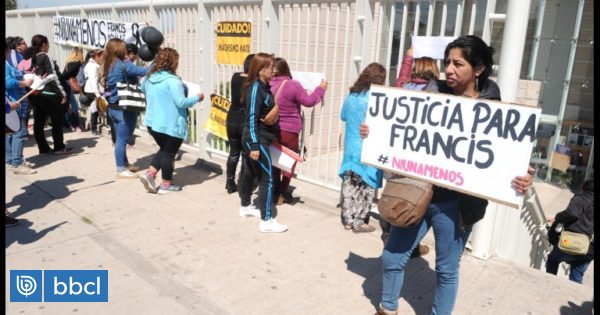 a 40 years in prison was convicted Daniel Díaz, after the Third Chamber of the Oral Criminal Court of La Serena condemned him for the crime of aggravated fire and qualified homicide.

Judge Claudio Weishaupt established that he was sentenced to life imprisonment for each of the crimes; the fire of the degree of consummation, committed on September 16, 2017 and "as direct and immediate author in the crime of qualified homicide" perpetrated on October 13, 2017 against Francis Aguilar, as requested by the Public Prosecutor and the Complainant, who was SernamEG.

Daniel Diaz, during 2017, was found to be forbidden from approaching Mariana Alvarado Aguilar-her ex-partner and daughter due to acts of domestic violence. The now condemned, on that occasion, burned the house where Alvarado lived. A few days later, in the La Serena section of La Serena, he stabbed with 8 lunges killing Francis Aguilar, the mother of his former partner.

The Court did not accept any mitigation from the defending party.

The Seremi of Women and Gender Equality in the region of Coquimbo, Ivon Guerra Aguilera, was pleased with the decision taken by the courts and noted that "this is a powerful signal that is being delivered. SernamEG, we ask in terms of punishment, are saying a lot of violence and feminicide against women. We do not want there to be any mitigating factors for crimes of this nature. "

SernamEG's lawyer, Natalia Honores Astudillo, said that this has affected the accused's lack of collaboration, which was maintained throughout the investigation and development of the oral trial, "by placing numerous alibis, statements and versions of the facts that, ultimately, established that they did not correspond and that they were not effective, hindering the administration of justice. "

Prosecutor Rodrigo Céspedes admitted that this attitude of the accused aimed only at "self-exonerating the two crimes." The alibis were discarded with testimony from witnesses (…) and other means of proof, such as auditions and expert reports. "

Diaz's lawyer, Rodrigo Barrera, declined to comment on the sentence and the high sentence and affirmed his position during the oral trial, so he avoided referring to the decision to appeal or not. "No comment," he said after leaving the site.

On September 16, 2017, a violent fire broke out in a house in the area of ​​the city of El Olivar, where Mariana Alvarado and her daughter lived. On October 13, Francis Aguilar, mother of the owner of the house burned, was murdered in the sector of the Antenna and everything pointed to his son-in-law. On December 3, 2018, the Oral Criminal Court ruled that Daniel Díaz Morandé was guilty of fire and murder. On December 8, the Court sentenced him to life imprisonment twice.

At the end of the hearing, at a time when Diaz was removed from the room guarded by the Gendarmerie staff, Francis Aguilar's relatives insulted and rebuked the convict, stressing that he had destroyed a family.