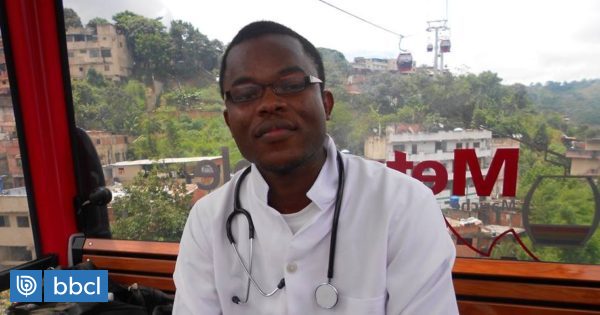 Shock generated the fatal traffic accident recorded the afternoon of Wednesday on the route between Mafil and Valdivia in the region of Los Ríos.

For reasons investigated, a truck collided with a car, while the truck load was in a wagon who transferred dialyzed patients.

Nine people died and 11 wounded. Among the survivors, there is one that stands out for rescue four people which were also affected.

This is Ginel Jules, a doctor of Haitian nationality, who was traveling in the van with their patients.

In an interview with BIO BioJules said he did not see the beginning of the accident when he fell asleep on the way.

"I was sitting and I felt the shock.When I woke up I saw the van completely destroyed"I could not see anything else," said the doctor.

In his story, he pointed out that behind his seat was a broken window, a space through which He got out of the vehicle., which we remember, was under the load of the truck.

"When I left I felt that I could not stay without acting. I came back to try to rescue the people who were inside the van, "he added.

In all, he has rescued four people, including Laromie Thomas, a Haitian national 30 weeks pregnant.

Ginel said he did not see the woman again, however, he contacted his partner and he said she is fine, just like the baby, so I could be released this Friday.

Ginel was traveling in the vehicle with those who were his patients, of which six died on the spot of the accident.

"I can not explain the emotions we feel at this time. Know that you are their doctor and they are your patients and not being able to save them at the moment… the sadness I feel is very great, "said Jules.

He also emphasized that the people of Máfil are with the victims and their families. "We wanted to do everything to save the patients, but we could not" he added.