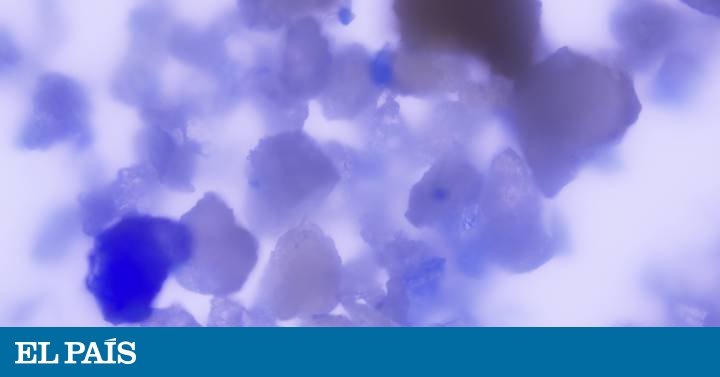 The tartar accumulated in the teeth of a nun from a small convent of the eleventh century confirms that women were an essential part of the transmission of culture in the Middle Ages. Using sophisticated technologies, European and American researchers identified among dental plaque particles the most valuable and rare pigment of the time: the ultramarine blue. Obtained from lapis lazuli, it embellished tables, frescoes (centuries later would color the sky of the Sistine Chapel) and the most exclusive manuscripts. How did that come to that woman's mouth? The scientists argue that she clung to her teeth as she refined the brush with which she illuminated the books.

On this road, from the most dirty to the most beautiful, chance played its part. "We discovered the blue pigment in the dental plaque by accident," says study researcher Max Planck for the Science of Human History (Jena, Germany) and co-author of the study, Christina Warinner. A few years ago, a team led by this ancient human microbiome specialist was scanning the teeth of human remains found in the cemetery of a small Augustinian convent in Dalheim, western Germany. They were the teeth of a woman, probably a nun no older than 60, dated by radiocarbon between 997 and 1162 of this time. They identified as B78.

"In fact, we were conducting a study on health and diet, looking for microscopic bacteria, starch and pollen on calcified dental plaque," says Warinner. But among the biomolecules of viruses, bacteria, and organic material trapped in the calcified calculus, they also found blue particles so intense they could not be anything but a mineral. "When we found out, we wanted to know what it was and then what it meant," adds the German scientist. The current paper, published in Advances in science, tells how they managed to identify this blue and suggests how it came to the nun's teeth.

To first remove the tartar and then isolate the blue particles from the rest of the dental plaque, the scientists used an ultrasound (sonication) not very different from that used by dentists. They found up to 100 particles in the calculation of a single tooth, with an average size of 10 microns, about one-tenth the thickness of a human hair. The largest concentration of particles came from the tartar of the anterior part of the prosthesis, a detail that will help them determine how they got there.

In addition to the loss of two molars and signs of mild periodontitis, the remains of the nun show no signs of disease or trauma that may explain blueness of teeth. Suspecting that it might be a pigment, the researchers subjected the particles to two different spectrometric technologies, one using an electron beam (scanning electron microscope or SEM) and another taking advantage of a light scattering effect (micro-Raman spectroscopy). Comparing the spectra obtained with references of other blue pigments, they were able to determine that what the nun had in her teeth was the lazurite, the main mineral present in the lapis lazuli stones.

"The blue pigment obtained from lapis lazuli was the most expensive in the Middle Ages," recalls scientist Victoria and Alberto Museum, dedicated to the decorative arts, Lucia Burgio. "Until the discovery of America, lapis lazuli was only found in present-day Afghanistan, which explains why it was so precious and difficult to obtain," adds the expert in the analysis of works of art, not related to the study. Burgio further adds that, unlike other blue pigments that degrade over time, such as azurite, the ultramarine blue of the lazurite maintains its liveliness to this day.

Harvard professor and one of the greatest American experts in medieval history in Europe, Michael McCormick, extends the relevance and unique character of lapis lazuli, lazurite and ultramarine blue: "He came from a mine in Afghanistan and had to travel from there in caravans to Constantinople or Alexandria and then bought by the Venetian or Genoese merchants, was shipped across the Mediterranean and finally passed merchants across the Alps to Germany. "

How did such a special pigment, worth gold, reach the scale of a nun in a small German convent? Researchers acknowledge that they do not know for sure. But they point to four possible explanations and arguments for dismissing the first three. One possibility is for the nun to use lapis lazuli as a medicine. From the ancient Persians and Greeks, lapidar medicine, based on precious gems, was one of the ways to cure evils. But the earliest medieval medical treatises only appeared at the end of the eleventh century. Therefore, it seems unlikely that this practice from the east would have reached Germanic lands before the nun died.

Another possibility resembles the result of the mystery of the work The name of the Rose, by Umberto eco. The nun's blue could come from the devotional osculation, the habit of kissing the sacred texts. It became so fashionable in the late Middle Ages that some liturgical texts were distributed with attached tablets where they kissed and so did not deteriorate them. Although there is evidence of practice already at the time of the Merovingians (6th-8th centuries), it would not be usual until three centuries after the death of the woman of the convent of Dalheim.

Although there are other illuminators, such as the co-author of Gerona's El Blessed, this study suggests that nuns were no exception.

Only two alternative scenarios occur to the authors of the study: either the nun made the pigment based on lapis lazuli or herself wrote or illuminated manuscripts. The Asian lapis lazuli trade was in the hands of the Venetian merchants, who controlled it with an iron hand. The first treatises that explain the complex process of milling, washing, suspension and filtration to obtain ultramarine blue are also Italian. But they were written far and far after where the nun lived and died. Although they do not rule out this possibility, the researchers point out that the pigment had already been produced in the convent. So they bet that in their work of illuminating books, the girl will repeatedly take the brush to the mouth to refine it before another blow. And then he was messing with his blue teeth.

"The use of lapis lazuli as a remedy or devotional ossicles would not produce the deposition patterns we observed," says York University (UK) archeologist and co-author of the study, Anita Radini. Instead, he opts for the nun's thesis to write or illuminate, "by the way they are integrated into the tartar: the particles appear as loose powder and their size corresponds to the prepared pigment, not to the irregular mass [del proceso de preparación]"he adds.

If so, he would be one of the earliest medieval book illuminators of which there is evidence. It is not the only one, there are great manuscripts, Liber Scivias, the 12th century abbess Hildegard of Bingen or, even older, the Blessed of Gerona, a codex in which part of the miniatures were painted by a nun. But this research reinforces a scenario in which, far from being an exception, the participation of women, especially religious, in the transmission of culture was not an isolated phenomenon.

The medieval history expert and co-author of the Alison Beach study argues that the writing and illustration of medieval manuscripts was a matter of monks, yes, but also of nuns. "Most nuns worked in the shade, perhaps under particular spiritual pressure to practice humility, and although many had great abilities, such as our B78, they would remain anonymous, women like B78 would have spread to medieval Europe at the time, working in many cases for bishops or abbots beyond their own communities or regions, leaving no traces of their identity as artists. "

His colleague McCormick agrees with Beach: "Scholars have assumed in the past that copying and illuminating manuscripts was a masculine affair, but excellent recent research has shown that women played a much more important role than many thought." He says, "This new study is the first to physically identify one of these artists mentioned in the charts and records of the time and opens up a completely new way of identifying women (and men) artists of the era. "