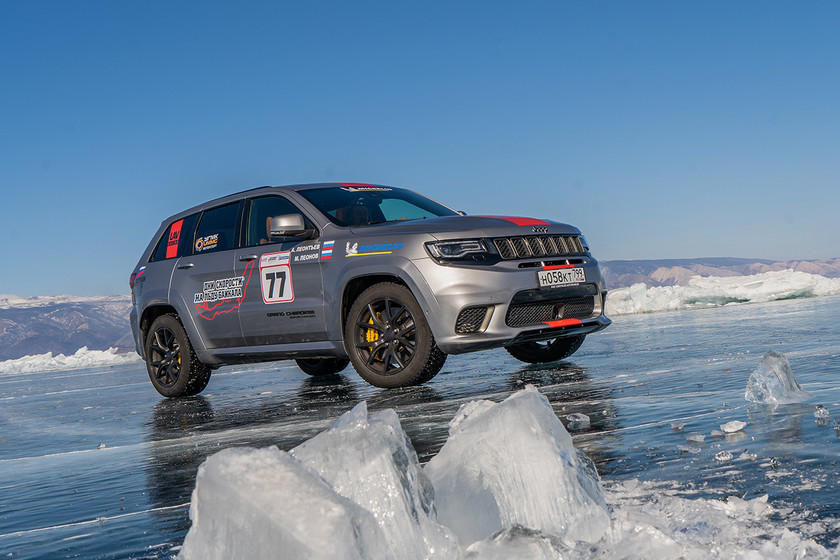 It is becoming increasingly common to find everything on the streets with a speed record in its category. If the Mercedes-AMG GLC 63 S 4MATIC + recently climbed as the fastest Nürburgring SUV, now the superlative Jeep Grand Cherokee Trackhawk, although in your case it becomes the world's fastest road … on the ice.

The most extreme and beneficial variant of Jeep Grand Cherokee, the Trackhawk, did not go to green hell to unleash its full potential: Instead, the American brand decided to demonstrate what it is capable of on an icy surface, and so took it to the Lake Baikal, located to the south of Siberia (Russia).

Named the deepest lake in the world, and the largest freshwater lake in Asia, it has been the scene of the 2019 Speed ​​Days which, in turn, are celebrated during the Baikal Ice Motor Sports Festival. And in this edition the protagonism was taken by the Jeep Grand Cherokee Trackhawk, making it the fastest SUV on the face of the earth on the icy surface with a 280 km / h.

A record mark … below your top speed

While on paper The maximum speed of the Jeep Grand Cherokee Trackhawk is 289 km / h, the point obtained in the test at Lake Baikal is 9 km / h lower. And this has to do with the characteristics of the road, with much less grip than the asphalt of the Nürburgring or the plain of the Salar de Bonneville, usual scenarios for speed records as is the aforementioned Siberian lake.

Faced with a 12-kilometer course with no snow or other irregularities that could compromise safety, the Grand Cherokee Trackhawk made a total of two one-mile passes in opposite directions. O average speed obtained by the American SUV in the test was just over 257 km / h, after a moving exit, while the maximum he could achieve was 280 km / h.

The test was monitored by GPS in each of the tests carried out by the SUV in accordance with the standards of the International Automobile Federation (FIA) and the Russian Federation of Motor Vehicles, so it is an official record in Russia.

On the other hand, and as reported by the Jeep, the used unit of the Grand Cherokee Trackhawk received no modification except that some "unnecessary elements" have been omitted (which they do not specify) and only the amount of fuel needed is used in order to penalize the weight as little as possible.

Remember that the Jeep Grand Cherokee Trackhawk comes to life thanks to a propeller 6.2 liter HEMI V8 and nothing less than 717 HP (the same as the Dodge Challenger SRT Hellcat). And despite nothing less than 2.5 tons of weight is able to make 0 to 100 km / h in 3.5 seconds and the quarter mile in 11.6 seconds. And now he can also take his chest for having become the fastest ice SUV in the world.

To share The 717 HP of the Jeep Grand Cherokee Trackhawk has made the world's fastest SUV … on the ice!