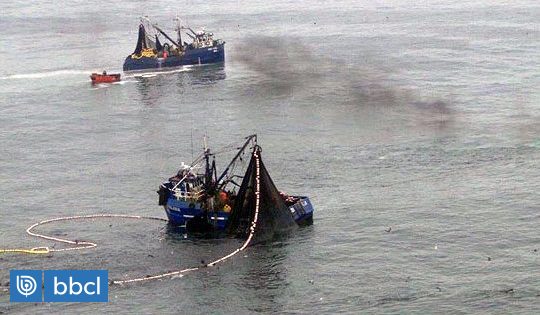 Six boats of Colonel and Lota they were surprised operating illegally resources of the sardine and the anchovy, with a volume reaching 200 tons. In fact, two of them had already been summoned to court, but they committed the same offense again.

On Friday morning, inspectors from the National Fisheries and Aquaculture Service (Sernapesca) Bío Bío, along with members of the Navy, detected these vessels from two artisanal fishermen's organizations, capturing the species mentioned illegally, they had already fulfilled the corresponding amount for this year.

Biobio: In two days, six vessels were detected in #PescaIlegal in Coronel. Damage to sustainability exceeds 200 tonnes of sardines and anchovies. Three of them have already been violated for exceeding the authorized quota. #ChileWeCare All pic.twitter.com/yyM7dLiXZO

According to what was reported by the service, more than thirty days ago they were notified that their quota had been closed and that they have no other fishing balances available, Despite this, they continued to operate in illegal fishing operations, in fact, two of them had already been referred to the public agency last week for the same infraction.

On this occasion, for the new offense that participated five quotes against three of the surprised ships and the situation of the remaining three is analyzed, according to the national director of Sernapesca, Alicia Gallardo.

Along the same lines, the fishing authority recalled that there are 68 organizations fishing for pelagic only two have boats involved in these illegal catches, to the detriment of the great majority that complies with the law and respects the closure of quotas to protect the sustainability of the resource.

From the Regional Federation of Artisanal Fishermen (Ferepa) they value that the fight in this situation is strengthened, because the same organization asked Comptroller last year to investigate money laundering this was happening in the Lota and Colonel area.

Its president, Hugo Arancibia, mentioned that he believes that this happens because of a fearful inspection of Sernapesca in these communes. Besides that, has recognized that there are situations of but he denies that mafias operate in fishermen's organizations.

In the control operation the purse seines with which the catch was seized were seized, those that have been sealed to prevent them from being used again.

The second crop of sardines and anchovies is still in progress in the maritime waters of Bío Bío, which is subject to weekly evaluation by the according to the monitoring reports of the biomass carried out by the Fisheries Development Institute.