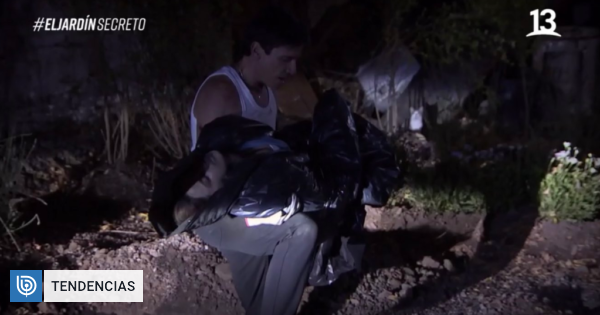 On Tuesday night a new chapter of the evening television series was lived Alliance of Blood, which used the hashtag # Secret Garden relative to a fact starred by Benjamín (Álvaro Espinoza).

It turns out that the doctor came to the courtyard of a humble house to bury the body of his last victim, a young prostitute who knew of his adventure with Daniela Solís (Antonia Bosman).

At the time he buried the body, a woman who lived in the house approached him and threatened to call the police, but the villain responded by saying that He was the owner of the house and out into the garden.

After that, the woman interned the doctor at home, and told her that she was in charge of taking care of an older man who was prostrate, who always remembered familiar things and his son. Inviting him to visit him for a few minutes.

However, Benjamin did not want to visit the man for the bedroom, indicating that he He suffered from senile dementia and I could not help it.

The discomfort of the character of Espinoza made the followers of the series speculate with something that, at first, does not seem exaggerated: some people indicated that that veteran would be the doctor's father.

Bernardo Ruiz? What else does this man hide? (I.e. # Secret Garden pic.twitter.com/64fusYPJGQ

Weeks ago, the actor himself had posted an image on his Instagram account with an elderly man in a wheelchair. Beside the snapshot, he wrote: "Next victim?"

The truth is that this fact has generated several theories in social networks. Some viewers added that Benjamin's mother would be Helvia, owner of a place where the four protagonists meet to discuss.

These were some reactions in social networks.

# Secret Garden Benja's father is alive! This old woman knows everything! I give you signed pic.twitter.com/SIlphCrOr4

Must be a UDI member or follower of Kast # Secret Garden

I'm sure Benjamin had already killed more people, one because he told the girl he did not want anyone to enter and second, that the man who is sick feels spirits, coincidence? I do not believe# Secret Garden#BabbleBang pic.twitter.com/co8oUXrpzZ

"Are not you going to see him?" : O # Secret Garden pic.twitter.com/0cexipliXt

According to my theory, Daniela's head is in the garden # Secret Garden

"Daniela's head is in the garden.
"The old man is Benja's father."
– Benja because of that imperfection in the arm uses healing.# Secret Garden