"Santa Claus and Company", a Christmas story with the qualities of a blockbuster 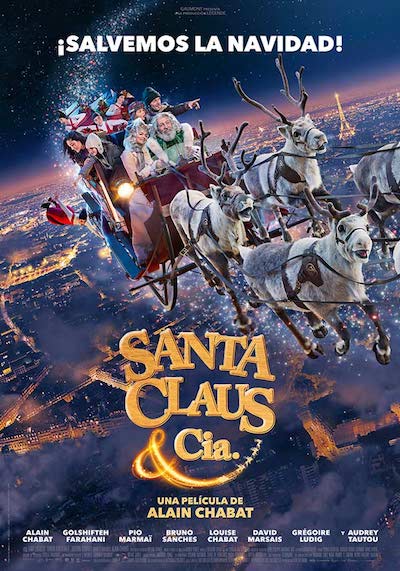 Wanda – Everybody believes in you.
Santa – Everyone? I do not believe"

The "I ask" letters do not stop reaching the frozen and frozen place where he lives Santa Claus with his lovely wife Wanda. In another territory, in the middle of the earth, 92,000 elves dressed in red make tireless toys: puzzles, dolls, cars and garages, farms and animals, monopolies and teddy bears … millions of bears because this year demand has grown.

All kids want a plush toy and Santa wants everyone to have crayons too.

"Santa Claus and Co.", the new film by the French director Alain Chabat ("Asterix and Obelix: Cleopatra Mission") is a family comedy that Chabat himself wrote and starred, along with Audrey Tatou ("Amélie") in the role of Santa's wife.

Pio MarmaÏ ("The first day of the rest of his life"), Golshifteh Farahani ("Pirates of the Caribbean: Revenge of Salazar"), among others, and a couple of children who properly fulfill the task entrusted.

On Christmas Eve, the 92,000 elves who work for Santa Claus making and packing gifts are sick with a mysterious evil. It is an emergency that Wanda says can be cured with a vitamin C capsule. To catch them, Santa takes the sled and goes ashore, lands on a Paris roof lit as never before in Montmartre right next to the Moulin Rouge, and begins an adventure in search of remedies that leads him to collide with a totally unknown world, attacking a pharmacy, confronting the police and finally finding allies in a family. All to save the magic of the most important night.

In this poetic and entertaining comedy, the character that makes you dream on all continents has St. Nicholas' appearance of the classic Nordic legends: his cloak is emerald green and his hair is silver, details that are immediately appreciated by both children and over those who keep asking. It also has a sweet look and a calm voice that annoys the humans with whom it crosses almost as much as its ability to appear and disappear without the need for doors or windows as well as knowing the names of all and the desires that are They hide in the letters sent to the address of the North Pole. And it accompanies all the "props" of the genre: reindeer, sleds, stars and meteorites that cross it on the way from heaven to earth.

From this clash between Father Christmas and ordinary human beings, between the character of the legend and the men who created it, in a story with very beautiful images and many special effects, comic situations, inevitable understandings and confrontations, moments of innocence and to spectacular scenes like the long crossing of the Champs Elysees in flying sleigh.