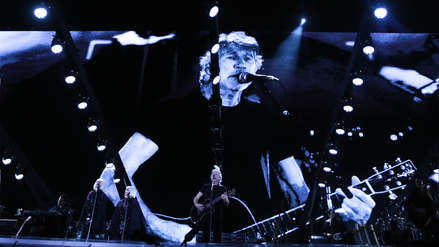 Everything enters through the eyes. Who knows very well Roger Waterswho, with his classic clothes, polo and black pants, entered the imposing stage of the Monumental stadium of Ate.

Gigantic screens covering about 70 meters long stadium field were perfect amalgam with the rock of the British artist and his band.

The concert began with "Breathe","One of these days"AND"Time", Which were instrumental songs, which began to awaken the thousands of spectators.

Showing his eternal youth on stage, Roger Waters I walked on the imposing stage to greet the audience, raising my arm as if in the midst of a social protest.

The song "Welcome to the machine"It was the first song sung together between Roger Waters and your audience. Both were already starting to connect to the show that was coming.

12 children dressed in balaclavas and dressed in orange uniforms, as if they were criminals, entered the stage to perform the choreography of perhaps the most anticipated music of the night:Another brick in the wall"

The subject was sung by more than 20 thousand people who gathered in the Monumental Stadium. The euphoria increased when the children revealed a black polo with the inscription "Resist"They had under the orange suit.

At the end of the ironic music on the giant screens were emotional messages: "Resist Mark Zuckerberg and censorship on the Internet, "" Resisting Trump and Bolton in the United States, "" Resisting Putin in Russia "," Resisting Bolsonaro in Brazil ", among others.That was the end of the first part of the concert.

THE GOVERNMENT OF THE PIG

After a brief interval of 20 minutes, Roger Waters He returned to the stage because he still had several surprises saved for the public of Lima.

The British performer and his band played the song "Home"For which animal masks were placed Roger Water put on the face of a pig and took two posters, one that read"Pigs dominate the world"And another with a strong message:"Jigs … Pigs"

Precisely, the group continued with the theme "Pigs", Which was dedicated to Donald Trump. The stage screens revealed several parodies in pictures of the president of the United States.

In addition, a gigantic balloon of hot air in the shape of a pig flew over the entire field of the Monumental Stadium and carried a phrase inscribed on it:Be human"

At the end of the song, the screens gave another abrupt message: "Donald Trump is a pig"The audience celebrated the appearance of this phrase.

11 years have passed for Roger Waters to return to trek Lima and it is not known if he will return soon. Therefore, the founder of pink Floyd It left an unforgettable memory for all followers. When interpreting the song "Us and them", the same name that led to their tour, several laser lights designed the iconic Pink Floyd triangle.

The closing of the concert was marked with the theme "Comfortably Numb", for which Roger Waters He stepped off the stage and shook hands with his followers in the front row. The British singer promised a memorable concert and fulfilled.