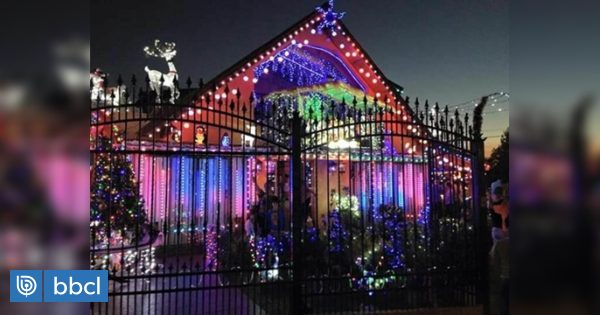 A show. In which the house of Juana Palominos located in Florida, who for eight years decorated the exterior of his house in a very Christmas.

The lighting and the ornaments he installed attracted the attention of Florida residents, who came en masse to watch the house light up each night.

However, not everyone was happy. Palominos said LUN that his immediate neighbors claimed him to the large number of people who came to see the show, which even forced the presence of Carabineros to direct the traffic.

So, decided not to light his house in 2018. "They do not want me to turn on the lights because a lot of people come in. They say it can be dangerous because it attracts thieves, but nothing happened, and if anything happens, they'll blame me," he said.

He added that "problems have hit me." They claimed that the people who came to see the house walked on the grass, that the cigarette butts were thrown, which were parked on the edges of the house, which covered the entrance of the parking lot.

Among the decor he installed were lights that moved to the rhythm of the music, pine trees four meters high, a deer imported from Ireland and a sled. "Now I have everything saved because they irritated me," he added.

The businesswoman in the automotive world commented that in order to get her decoration, she occupied 65 extensions and paid about US $ 50 thousand extra in electricity, since the lights were LED and did not spend as much.

What do you plan to do? Currently it is unclear whether he will finally put the lighting or finally sell it. For now, still receiving letters from children They ask him to reconsider his decision and turn his home into a Christmas show again.

The commune's mayor, Rodolfo Carter, said on Twitter that "as a municipality we will do our utmost to recover this threatened tradition."