Piñera presents the Virtual Commissariat: knows the procedures you can do | National 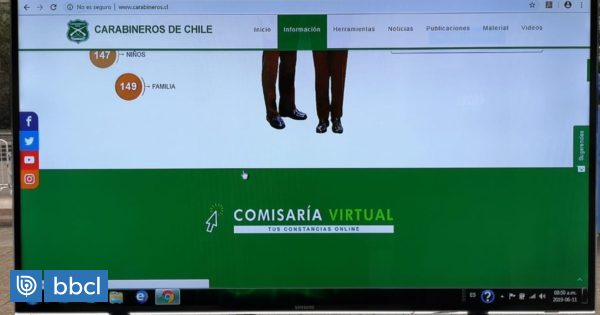 In the morning of Tuesday, accompanied by the Minister of the Interior, Andrés Chadwick; President Sebastián Piñera presented the Police Station Virtual Police Carabineros.

According to the head of state, the tool will allow citizens to carry out procedures "made in person" and 59% of total current records.

Specifically, in its first stage, you can leave records of abandonment of the home, violation of a work contract or employment contract by the employer or employee, failure or obstruction of the regime of visitation and loss of documents or cell phone.

With this, from La Moneda they assured that it would be possible uniformed personnel free of administrative tasks, with which they can be assigned to patrol tasks.

Such procedures can be done on page Web official body of the forum, which should be enter the unique password.

"At the end of the process, Download a voucher and certificate of constancy, "they said.

The Ptte @sebastianpinera next to the minister @andreschadwickp in @min_interior starts # Virtual police station in @CarabdeChile where you can make records of homelessness, work purposes, loss of phone or documents and visit regime https://t.co/sZ6H2DZrWe pic.twitter.com/img6PNeKsM

In his speech, before the House of Government, Piñera announced that his government also ready to send the project that will be known as "Anti-Bullying Act".

The initiative will seek to regulate the launching of fireworks and control the carrying of weapons and shots in so-called "Narcofunerales".

Piñera criticized the desire to show force on the part of these groups, for which he affirmed that the Executive will reinforce "the legitimate force of our Carabineros" by means of "Restore the rule of law in all neighborhoods".

In addition to the above, La Moneda announced that Piñera will sign the bill that modernizes and strengthens law enforcement and security forces, training, coordination and coordination of work between the Carabineros and the Investigative Police (PDI).

The measure modifies the Organic Law of the Police and privileges the prevention for the Carabineros and the research specialty for the IDP, highlighting its role as auxiliary organs of justice.

Come and meet us # Virtual police station, in the Plaza of Citizenship. The platform allows reporting and leaving records, to streamline services through the institution's digital development. https://t.co/8ovwPZ2OZM#OrdenyPatria#Prevention is Our Essence pic.twitter.com/ktujPPPbX5