Patricia Maldonado is again in the eye of the hurricane after her radio program revived an old controversy involving former celebrity Tatiana Merino.

It is a well-known fact that Maldonado and Merino do not swallow, but this time the opinólogo reflected a conflict they had lived for several years, when he tried to build a foundation to help the national celebrities of old age who could not live.

The speaker Much pleasure He assured that Merino wasted more than 100 million pesos contributed by the State to the foundation "El Regazo del Artista", that would operate in a house located in the sector of Maria Pinto.

"He used a nursing home to make baked goods. There was never a grandpa."Said the announcer, adding that the actress bought a house that" was for fun. "

"All comedians were going to bake and there was no old man in there. With Pancho Saavedra, with whom she researched the subject years ago, we discovered that she never brought an old man. You can not have an old house where there is not a hospital nearby"He nodded.

As expected, Tatiana did not hesitate to respond and, true to her style, she went with everything against Raquel Argandoña's close friend. It was through a publication on Facebook that the Chilean based in Australia clarified that the situation of its foundation was totally in order and that the money was also returned to the General Treasury of the Republic.

"You have to be very unhappy to insult a person and above all speak so many lies by having the tremendous past. Mrs. Patricia Maldonado, stop walking around inventing things that were not like you told them"He left saying Merino.

Then he added, "When I remember this internship, I say to myself," What an idiot! How did I not denounce her for slander? "But I did not know what to do, I was so emotionally weak, I tried defend myself and did not know how. Besides, you had the microphone and no one heard me. So many things that were invented, so much damage that was done to me, and everything to politics"

Check your furious statements below. 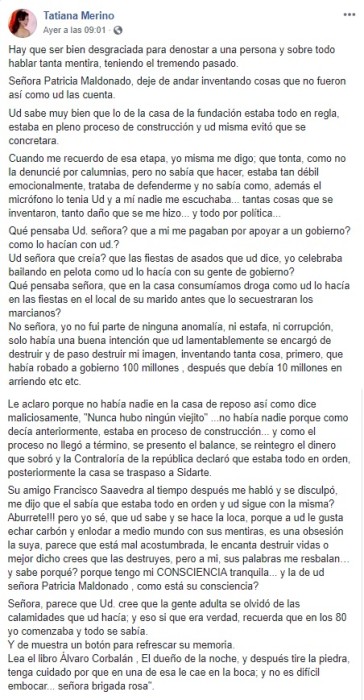