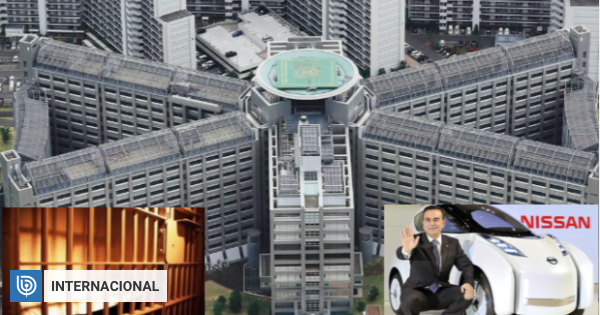 Brazilian Carlos Ghosn, president of Nissan, Renault and Mitsubishi, no longer hears the roar of the engines. Now, the bars of his cell grind every time he closes and finishes his work in Kosuge prison, 40 kilometers from Tokyo. It is a place described as "sinister" by newspapers in France, such as Le Figaro.

For this place was taken by the alleged evasion of 39 million euros. Japan's justice presses the throttle in depth to gather more evidence against him, although the multimillionaires have tried (according to the indictment) to avoid every obstacle not to be discovered.

The prosecution claims that he paid his personal expenses with company money. However, its luxury life has been zero miles and miles of flight. In fact, before being arrested in his jet Private, he was interrogated for 3 hours. That time was enough for the authorities to take him to detention, changing his lifestyle to the most precarious in prisons where there are no privileges, according to the number of zeros in the accounts of the accused.

For Kosuge's arrest, they also call it "The Judicial Laundry." The title was earned "cleanly" by the treatment given to those who defiled the prestige of a country, with crimes that for ordinary Japanese exceeded the line of loyalty and honor for which its citizens are known. Ghosn, arrived at this place for supposedly going at full speed and unlike Japanese customs.

Now he pays dearly and without a checkbook in prison. 3 dishes of rice a day, rations that leave behind the banquets of a millionaire, very timely at business lunches. The echoes of laughter in these meetings, now replaced by those left by the closure of his cell. Media such as RT France resume the RTL publication, giving accounts of this treatment to the not-so-common criminal, but that's one more in the system.

He sleeps on a mattress inside the prison, which, although warmed up, does not compare to the homes and hotels that put a seal of guarantee on their internationally profitable business. In fact, his family struggles because justice does not confiscate another property in Rio de Janeiro, Brazil.

The visits of their family members also have a common context in the life of any prisoner. There are no special rooms equipped with a radio, TV, or other device that will lodge with the meeting. 15 minutes are required according to local justice so you can see your loved ones during the week. He can not speak in a language other than Japanese except his native language, Portuguese. The other languages ​​with which he was so closely related were left out of the agreement.

Journalists or partners can not come in to see you for exclusivity. The judiciary fears that there will be destruction of evidence before any visit outside the family context.

No sending or receiving of emails, phone calls or other remote communications. Internally treated deference, in other parts of the world, that take miles and miles ahead.

It is a test of fire that lives a man who has passed from reflectors and success to the dark reality of a cell. The authorities must decide with the process under way, if it can be exonerated, free on bail or put the necessary brake in any precautionary measures that leave it free. If so, he has already begun his new life in prison, which he expunged for ten years, during which time he would be arrested for the crime of which he is accused.