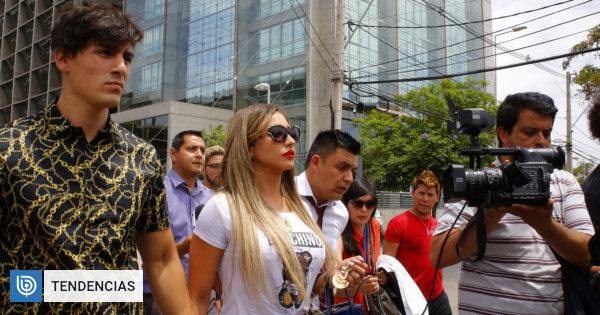 After attending an event in Iquique, Nicole Moreno He was surprised to make a series of strong statements about what happened to his 16-year-old son who was charged with participating in the attempted manslaughter of a teenager in Las Condes.

In a contact with the morning Hello Chile, the model said that her entire family is being threatened with death and that she is under police protection.

In the same interview, exchica reality also said that he was very happy that the young man who was shot was discharged and sent a greeting to the minor's mother and told him that "Take care of your environment."

"Here is a more serious question that I can not speak because it is a serious matter to investigate," he said.

When she was consulted by the animator Eduardo de la Iglesia, if it was a matter of drugs as she insinuated during the formalization of her son, she assured that she could not say that. "I do not want anything to happen to me. There are very professional people working on the subject, and they will clarify many things"he added.

At that time Julia Vial asked if she was being threatened, to which she replied: "They're taking care of me. I'm protected."

After several minutes, Moreno confirmed that it was police protection. "My whole family is threatened with death", he added later. "As the IDP behaved, after these audios, behaved well with us," he said and also explained that he does not know where the threats come from, although he has suspicions.

The contact ended when she received a phone call from her lawyer advising her not to continue the interview. "I can not keep talking, okay, I said it here, but please do not upload this video that really hurts me because I really regret it." I burned myself, "he said, forgetting that he was in live contact, notified at the beginning of the interview.

"Finally, what I wanted to say is that I'm happy that the child is no longer in danger and that he has walked out and has family resting," he added.

"I hope the child is not somewhere else later because no child deserves to be where my son is," he said.