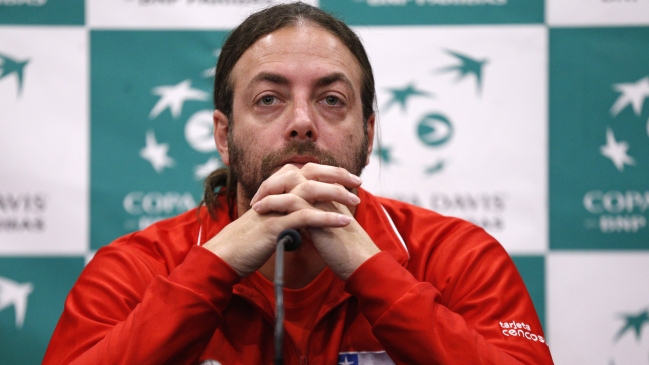 O The captain of the Davis Cup Chilean team, Nicolás Massú, told a news conference that it will be incredible to arrive at the Davis Cup World Group, something that qualified as a dream, adding that they are prepared to face any player, this in the absence of Dominic Thiem (8th).

"We have to face the opponent that is ahead. Favoritism can sometimes be on our side, but they have the localia and put the conditions. We are focused on facing the player who is and the games have to be played, "he said.

"We want to realize our dreams and, if we reach the World Group, it would be incredible., if you do not, you have to keep working because someday we'll get there., for that we work. We have the energy and the desire and we are well, "he added after the Special Envoy's question Outdoor in Cooperativa.

On the same line, Massú He added that "the Davis Cup one begins to prepare when the tie. They have great players plus Dominic Thiem that someone would love to have on their team, especially in clay, where it is one of the three best in the world. I wish you well in your recovery. "

"We have a team that can now aspire to important things. Due to the age of the singles we have, there is the possibility of continuing to grow … A result can not change you, if you lose you can not change the way you work. We should stay focused, "he added.

Given the option of reaching the World Group that will have a first unprecedented version in Madrid in 2019, he expressed that "the truth It's good to see that tennis is fighting for something important. I remember when we started. With the experience I had as a player and everything that is within my reach, we work in the best way. "

"We have a great multidisciplinary team and We are ready to play the best way. You do not need to set or set limits. When you set your mind, you can achieve great things. Some time ago we were almost in the third division and now at the doors of the World Group, "he added.

O captain of the Davis Cup team also confirmed that on Tuesday Julio Peralta joined, ensuring that they will evaluate how physically they are. In turn, he appreciated his presence in the team.

"The presence of Julio Peralta is important because he is among the 40 best in the world, he did very well in the circuit, He knows every player, doubles expert and can talk to the rest. Having three players gives us the possibility to choose, but this decision will be taken on Friday, depending on how they are. The doubles is an important point, "he said.

"He's working on recovery. I made the decision that he was on the team and I will see him in training to see if he can play or not. There is a medical thing, but I must also play with the option of having three players. If it's 100 percent, I'll decide which couple is the best. You have to understand that this is a team and this is the key that brought us here and that can take us to Madrid, "he added.

Finally, he assessed that in Chile "tennis has grown four and a half years and we are close to the World Group." If we win the weekend will be incredible, I am a person who lives dreams and imagines in Madrid among the 18 best teams in the world motivates me"