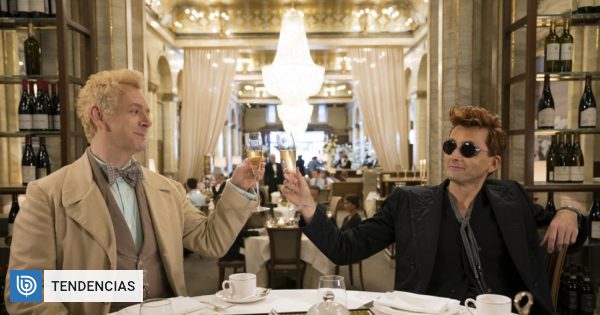 The apocalyptic satire Good omens has awakened the discomfort of several Christian viewers, who gathered more than 20 thousand signatures to demand that Netflix cancel the program … The only problem is that the production is not from Netflix, but from Amazon Prime Video.

The bet that is an adaptation of the fantasy novel of Terry Pratchett and Neil Gaiman, features the performance of David Tennant as the demon Crowley and Michael Sheen as the angel Aziraphale, who work together to prevent the arrival of the "antichrist" and the impending apocalypse.

According to the English newspaper The Guardian, the Return to Order campaign, which is a branch of the United States Foundation for a Christian civilization, launched the petition whose first goal was to reach 15,000 signatures.

"The Netflix series Good omens, based on a book by Terry Pratchett and Neil Gaiman, portrays the agents of Good and Evil as combatants in an arbitrary struggle without meaning or truth, "they explain on their website.

"This series presents demons and Satanists as normal and even good, where they simply have a different way of being and scoff at the wisdom of God, "they add.

"In the end, this is a denial of Good and Evil: the moral and natural law does not exist, only humanitarianism and, ultimately, a useless creed. This is another step to make Satanism appear normal, light and acceptable. We must show our rejection. Please sign our petition and tell Netflix that we will not remain silent while they destroy the barriers of horror we still have for evil, "they add.

In their critics, they also complain that God's voice is played by a woman, the actress Frances McDormand, and who portray the "antichrist" as a "normal child."

Gaimen, who is also the showrunner of the series, responded to the request through social networks. "I love that they are going to write to Netflix to try to cancel Good Omens. That says it all"he tweeted.

I love that they will write to Netflix to try and get #GoodOmens canceled It really says it all. https://t.co/8WNxCY1YmV

"That's so beautiful … promise me they will not tell you," he teased his fans so they would not realize the mistake.

That's so beautiful … Promise me you will not tell them? https://t.co/thYTOG7GBE

The production that was released on May 31 this year, has not yet release date in Chile.