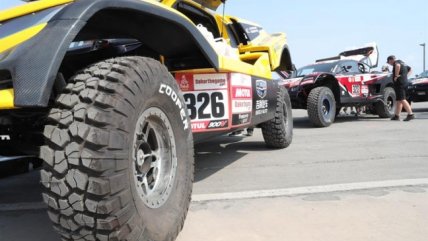 5:40 p.m.| The number of competitors that will be in a new edition of the Dakar Rally.

17:38| This year the Dakar beats its record of female participation with 17 competitors, of which several have paraded.

17:34| "Vest" López before his protocol parade: happy to be in Lima, although it was ideal to pass through Argentina and Chile. Expectations are high #CooperativeEsFutbol

17:03| The riders already cross the podium in Peru.

17:03| At this moment the start of the protocol is made in the Dakar 2019, whose first stage is held on Monday #CooperativaEsFutbol

16:36| More of the activities that happen before the Dakar Rally, that will have the presentation of the pilots from 17h00. # Dakar2019

15:35| This is how they presented the experienced French rider and enduro rider Stéphane Peterhansel # Dakar2019

13:07| Carlos Sainz, winner of 2018 and favorite of the Dakar, is ready for the competition

13:07| The starting podium, with the presentation of the drivers, will be at 5:00 in the afternoon.

13:04| The first activities of the Dakar Rally begin in Peru