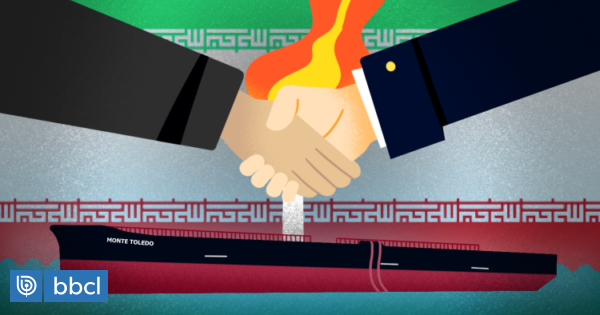 Under the magnifying glass of the Prosecutor's Office is the Iranian oil which arrived at ENAP Bío Bío aboard the European freighter Monte Toledo, after a long journey from the Middle East.

The hydrocarbon – known as Iranian Heavy– according to the Public Ministry, is the cause of gas emissions recorded in the middle of the year in Talcahuano, Quintero and Puchuncaví and It came as part of paying off a large debt that keeps that nation with our country.

But … Why does Iran owe money to Enap? What is the story behind Monte Toledo's journey?

As stated in the ENAP reports, it all started in 2001 when the state oil company – through its subsidiary Sipetrol International SA – acquired a 33% stake in the Iran-operated Mehr Block Exploration Services Agreement. with Repsol SA and OMV, the latter being its operator.

Six years later, on September 30, 2007, the National Iranian Oil Company (NIOC) declared the commercialization of a discovery made in the block called Band-e-Karkheh, which marked the beginning of negotiation of the development plan and contract. related.

However, in December 2008, as the terms and conditions of the development plan negotiated with NIOC were not economically viable for companies, it was decided unanimously not to continue the stage of development of the discovery, but reserving the right to demand the reimbursement of the expenses incurred in the operating stage, plus a fee for the services, as established in the contract of operating services.

After a series of negotiations to obtain the return of the exploratory expenses invested by the partners, which were interrupted by the restrictions that affected Iran, the consortium arrived on March 10, 2018 with an understanding to recover the debt (assessed at the time of the agreement at $ 28 million), which will be paid by the Iranian oil company in partial payments, as detailed in the state document.

Part of the payment was precisely the oil of the Persian Gulf country aboard Monte Toledo, which was negotiated along with other payment alternatives, which were considered part of the agreement, before the United States – under the government of Donald Trump. – would again impose sanctions on Iran in November this year.

Indeed, according to the Chilean oil company, outside the efforts to recover the receivable from NIOC, since 2008 the Consortium has not carried out any operational or commercial activity in the Mehr Block or with Iran.

In addition, ENAP reiterated that this is the only cargo of this type that has arrived and will arrive in the country, Discarding that possible new shipments have been canceled.

As mentioned, as of November 4 of this year, Donald Trump imposed new sanctions on Iran after withdrawing from the Joint Integral Action Plan (JCPOA), an agreement that lifted the punishments of the Persian Gulf country. has shifted its limit from its atomic energy program, according to the BBC.

Among the six established penalties are expressly "oil related transactions with companies such as the National Iranian Oil Company (NIOC), the Naftiran Intertrade Company (NICO) and the National Iranian Tanker Company (NITC), among others," international media reports. . Precisely the first of them corresponds to the signature with which the exploration contract was made by ENAP.

Four months after the oil transfer in Talcahuano, the procedures of the Prosecutor's Office to clarify the connection between oil and mass poisoning continued. Proof of this is the attack carried out jointly with the PDI at the Hualpén refinery on Monday, December 17th.

At the time, the head of the Public Ministry in Bío Bío, Marcela Cartagena, in charge of the case in its jurisdiction and also in the region of Valparaiso, She said that she was sure there was a link, although he acknowledged that the episodes still need to be connected.

"The prosecution is certain that the odors or gases that came out were all derived from the Iranian oil brought by Mount Toledo.The specific circumstances of how this occurred in each place, in each case, on each date, is what we are investigating" said the pursuer.

"That's the certainty that the prosecutor's office based today on his investigation and that he was not in anyone's papers," he said.

In addition, when consulted on the disparate effects caused in Bío Bío – where only one episode of gas emanation was recorded – and Quintero, Cartagena argued that in the first city Iranian crude oil was not discarded in decantation pools as – trial – occurred in the region of Valparaíso, among other variables such as wind, weather and ventilation conditions.

"Iranian oil is what causes smells in places, of course, that's what we have to connect, but there is a clear line of research", Said the prosecutor, without deepening the clues that underlie the link.

The Public Prosecutor's version contrasts with what the Chilean state firm mentioned, where it has repeatedly argued its innocence in this case, arguing that if the handling of crude oil is related to poisoning, this would have fatal consequences for the case. on board and for inspectors.

The argument is supported – in part – by a document issued by the General Directorate of Maritime Territory and Merchant Navy (Directemar) of the Navy the same 4 of August of the last year to which BioBioChile had access.

In this it is concluded that the alley process, ie the transfer of cargo from Monte Toledo to Cape Victoria, the latter property of ENAP, It was done in complete normalcy.

Precisely, within the eight variables cited in the text – signed by the engineer in risk prevention and environment and industrial civil engineer of the Talcahuano Maritime Governance, Macarena Silva – gas measurement at 20:40 is considered. of that Saturday, the same day in which the evacuation of the Mall Plaza Trébol and the Clinic Bío Bío had to be carried out. This analysis also showed levels in order.

Add to that the statement delivered by the embassy to BioBioChile, in which the National Petroleum Company of Iran (NIOC) denied "the false accusation of the persecuting agency of Chile."

"There were no serious charges against Iran and the remote possibilities are under investigation", added the NIOC through the document.