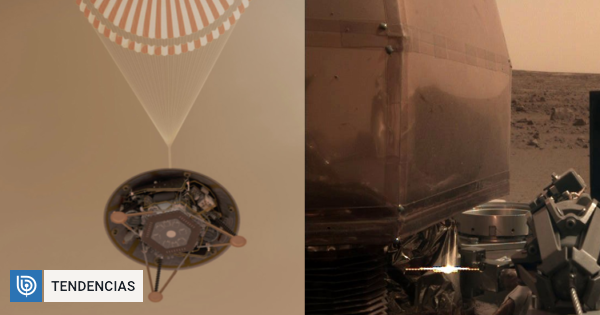 The American probe InSight he landed on Monday on the surface of Mars, after 7 years of work by the US National Aeronautics and Space Administration team, better known as NASA, by its English name, and almost 7 months of travel through space.

The landing took place at 16:52:59, Chilean time, one minute earlier than expected, making InSight the second vehicle currently active on the Red Planet.

The other robot that is in operation is the Curiosity, also of NASA, that arrived there in 2012.

After touching the Martian soil, the probe opened the solar panels to recharge the batteries.

A few hours later, he sent the first clear photograph of the surface of Mars, shared by NASA, which shows the stunning desert landscape that stretches across the horizon.

"There is a quiet beauty here. I can not wait to explore my new home""Wrote" the investigation into his official Twitter account.

There is a quiet beauty here. Looking forward to exploring my new home. #MarsLanding pic.twitter.com/mfClzsfJJr

This is the second image of InSight on Mars published. Previously, the probe had taken a test photograph minutes after its landing, which was also shared by NASA.

This photo looks very blurry because the lens cap has not been highlighted yet.

My first photo #Mars! My lens cap is not turned off yet, but I just had to show you a first glimpse into my new home. More status updates: https: //t.co/tYcLE3tkkS #MarsLanding pic.twitter.com/G15bJjMYxa

This 993 million dollar probe must – for about two years – listen and investigate the interior of Mars to try to unveil the mysteries of its formation billions of years ago.

This knowledge could better understand the formation of the Earth, the only rocky planet from which its interior was actually studied.