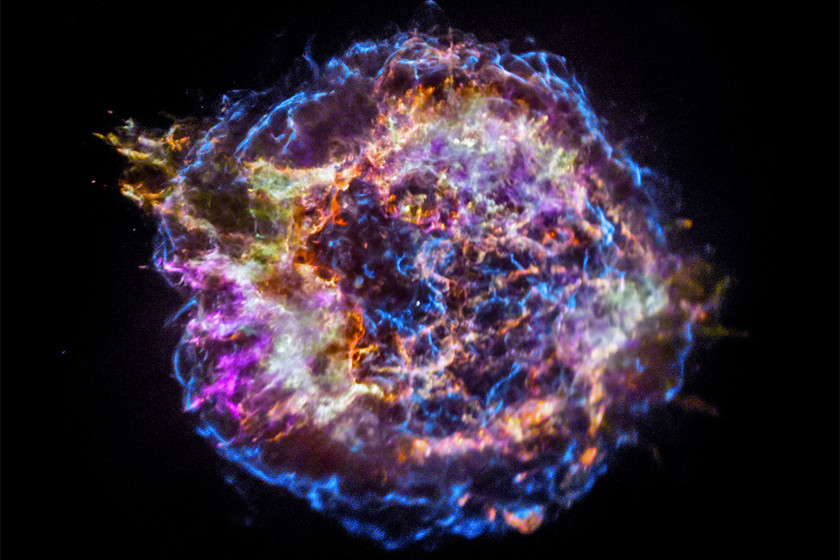 In June of last year, a new supernova-like object in the sky was observed from the ATLAS telescope in Hawaii, but its maximum brightness was much higher and disappeared much faster than that of a normal supernova. These differences raised the alarm for astronomers, so they returned their observations, and concluded that is about the birth of a black hole.

The supernova is called "the cow" (a peculiar name, but the explanation we will see now), and a team of 45 astronomers believes it is about the first time man hunts the moment a star dies to result in a black hole. The results of the survey were presented this week at the annual meeting of the American Astronomical Society in Seattle (Washington, United States), and will be published shortly in the Astrophysical Journal.

Nothing was normal since its discovery (for good)

We speak of a supernova when a massive star explodes or "dies," though This explosion forms a black hole or neutron star.. We talked about them, for example, when Victor Buso, an amateur astronomer, discovered one by chance, which was relevant given the difficulty of finding them.

In this case, we observed an object with a somewhat anomalous behavior that was called AT2018cow, so not long after the nickname "cow" (cow is cow in English). Cow is in the galaxy CGCG 137-068 in "only" 200 million light-years away from the Milky Way, looking at the constellation of Hercules.

Cow was something special from the start, because it was the closest supernova that was detected, so it allowed astronomers to observe it in unprecedented detail, as explained in National Geographic. We said that its maximum brightness was something out of the ordinary, and in fact registered a brightness ten times greater than a standard explosion of a star (detected on X-rays). A glow also diminished in days, when normally the brightness of the supernovae takes a few weeks to decrease.

This was compounded by the fact that the waste ejected from the explosion was much smaller (and of a different composition) than expected, and the radiation was also not as expected. They even thought they were dealing with human error, says team director Raffaella Margutti (Northwestern University astrophysicist), who describes the discovery as "a goal they had been waiting for years."

Raffaella Margutti, the team's director of astronomers, called the discovery "a goal she had been waiting for years"

In this way, what they conclude is that "the cow" is the formation of a black hole or a neutron star. Something that until now had not been observed right after birth, and this may represent a new class of objects within the existing category of "fast light transient objects."

A space and special cow

Remains for investigating the same cow, as its "core engine" works (ie the core, in addition to the observed debris). It is considered a compact central engine that releases X-rays of high energy and that is covered by an amorphous and asymmetric mass of material coming from some type of explosion.

What they believe is that this anomalous event can help that astronomers better understand the physics of the birth of a black hole or a neutron star, then we will see if there are more discoveries of this peculiar space cow or if we only know this phenomenon better.

To share Have we hunted for the first time the birth of a black hole? 45 astronomers believe that yes