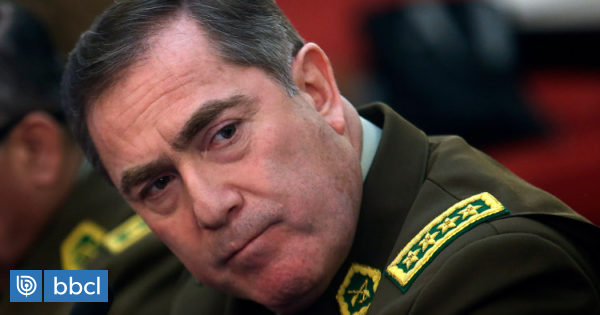 "Until December 12, I'm staying"This is the message that the Inspector General, José Luis Rivera, transmitted internally, after being appointed subrogated to the position of Director of Order and Security of the Carabineros.

A decision taken by General Director Hermes Soto, after agreeing with La Moneda's request the resignation of Inspector General Christian Franzani, accused of acting negligently after the homicide of ordinary citizen Camilo Catrillanca.

Thus, on Friday, during a meeting, the current chief of the Carabineros, Hermes Soto, managed to convince Rivera not to resign on the same day, but on December 12, a day after the interpellation of the Minister of the Interior, Andrés Chadwick, a pact that remained in force until Sunday night.

The fact, according to sources of Radio Bío Bío that knew in detail the dialogues that were generated there, indicate that the general Rivera I would have decided to resign on the same Friday, December 7, communicating it to General Soto, arguing that does not share the way the crisis was managed and he does not think he has the confidence of Sebastián Piñera's government to lead, despite doing so as a subrogation, a highly complex leadership like Order and Security.

Even the same sources explained that Rivera would have pointed out hours after "I saw how my general Franzani got rid of the dirt with no working hours and today it's like that.I do not accept that", the senior official would have repeated on several occasions.

This situation leaves the director general, Hermes Soto, in an abyss, since their internal leadership is highly questioned, without presenting plans to strengthen internal communications.

Rivera for Bernales: "I do not apologize for my general"

There are several senior officials who recall at this point an episode that led the Inspector General, Jose Rivera, when he was an intermediary officer in the sixth region and commanded the institution was the late General Director José Bernales, when after a "High Officials Reprimand" He replied that he did not apologize.

According to the stories of that time, Rivera was on vacation when a call from his superiors made him return to display figures and data related to the Quadrant Plan in your area, this in front of the general manager and dozens of officers and carabineers.

The presentation progressed smoothly, except until Rivera began to make a mistake in the presentation, which generated the annoyance of the general director and interrupted his presentation, to the point that he rebuked him for not living according to what was required of him. Bernalesla finishing the presentation.

After a few minutes, another officer told Bernales that Rivera had suspended his vacation make an improvised presentation, to which the general director sent him to look for him.

This dialogue, according to several officers of the Carabineros, demonstrated the character of Jose Rivera, Jose Bernales apologized for the deal and he did not accept, requesting the transfer, explaining to General Bernales that his leadership within the Carabineros of that police station was already weakened.

Anecdote they remembered in the last hours, from José Luis Rivera returns to have the same position.