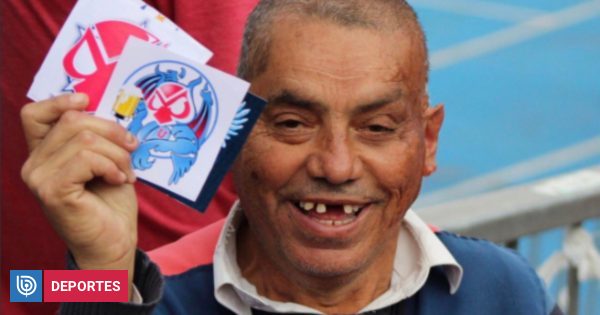 Chilean football cries for one of their emblems within the national stadiums. Hugo Figueroa He was a well-known salesman of stickers that walked the stadiums mainly in the Metropolitan Region.

Football fans who regularly go to the stadium are probably the ones who most regret the departure of Hugo Figueroa as well as his family. The seller ceased to exist on Monday.

On social networks many fans said goodbye to him and the club University of Chile He added condolences to his family and nearby through his official account.

For those who attended the stadiums, it was known as "Uncle of stickers." The funeral will take place this Tuesday at 12:00 in the metropolitan cemetery.

"Who said U?"
Today Hugo Figueroa left us, a well-known salesman, who for years went to the stadium in Chile, offering our club stickers. For your family and your near ones, our most sincere condolences.Come onLaU (I.e. pic.twitter.com/ckIYXxTY5Q

How did he do it in every court? I have no idea, I just know that it will be much easier to continue doing this now. QEPD Mr. Hugo Figueroa. pic.twitter.com/eQWOxxgS1x

What sad news the death of Hugo Figueroa best known in football folklore as the "Uncle of the stickers" from now on my condolences to his family … pic.twitter.com/Hj82ARKxv0

EMBRACE TO THE SKY. I am at the funeral of Hugo Figueroa, better known as "Uncle of the stickers". If you want to approach, you can do it without any problem, they will receive it in a good way. Passing Leyda 3514, Maipu.
Tomorrow will be his funeral in the Metropolitan Cemetery at 12:00. pic.twitter.com/NNYGiwYEwq

We learned of the sad death of Don Hugo Figueroa, a football worker who was seen in almost every field of the country, especially in the National, something nicknamed "hoarse". Our condolences and endurance for your family.

Who did not buy a sticker? pic.twitter.com/mwzKLvMWFh