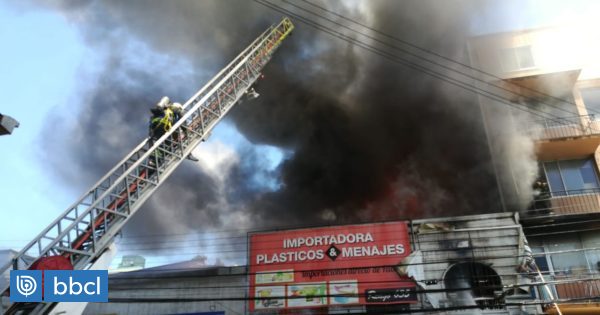 A fire destroyed two stores located on Rengo Street, between Maipu and Freire, in the heart of Concepcion.

Around 1:00 p.m. on Friday, a disaster that consumed a local plastics and another gambling.

Nine fire companies arrived at the site to fight the fire, which also caused damage to the roof of a hardware store.

At the same time, the money from the Carabineros they kept the traffic momentarily suspended.

Likewise, almost all commercial facilities close to the incident were large amount of smoke this was perceived in fact.

In effect, the provincial governor, Robert Contreras, assured that they were about 43 the locals closed in a preventive manner.

He added that the estimated value of self-assessment of people it was about 100, while those evacuated by firefighters were two who were inside a hostel adjacent to the destroyed building.

At around 2:30 p.m., the volunteers indicated that the emergency was already under control and in extinction, but the smoke spread through the center of the city of Penquista.

No injured person has been registered.