Fernanda Maciel's mother did not lower her arms and every time she appears on the screen she does it with firmness and security, stating that she will not rest until she knows the whereabouts of her missing daughter in February last year..

This time it was morning time. Hello ChileHowever, there was a big difference. During this interview Paola Correa he could not help but break when talking about his daughter and remember one of the most lively images he has of her.

The woman pointed out that at this point she is ready for everything and, if she remains firm, it is precisely because of her conviction that she will appear. "I am prepared for everything. To receive my daughter alive or maybe not. I'm dead inside, if I show courage, strength and smile, it's only for my daughter"He said.

Speaking about her daughter and how that time went by without her, she indicated that in her WhatsApp status she always writes things to Fernanda. "That I love her, that I miss her, that she's calm wherever she is, because I keep looking for her and I'm going to get there, yes or yes. Nothing and nobody will stop me"He said.

In this scenario, the woman also commented on one of her daughter's most vivid memories, the one that made her cry on television for the first time.

"Every night I would go out to smoke and see how she dressed or walked with her wallet, and I could not see her anymore. That makes me sad …"He said to add, evidently excited:"It's complicated because you gotta do something that no one made me cry" 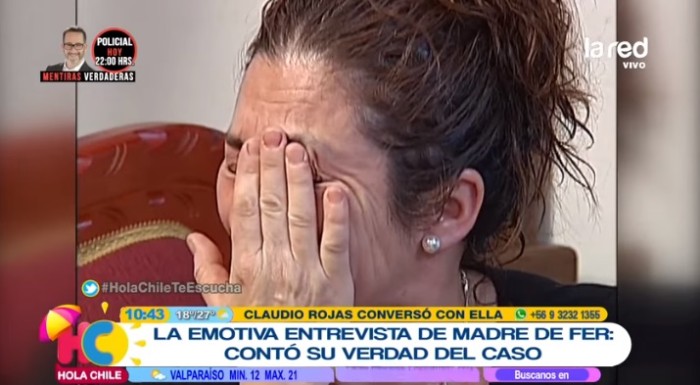 Another of the strong moments of the conversation was when the mother made a kind of painful mea culpa. "I was worried … and I do not see it now. Maybe, if that day Fer left, I would have stopped there, I would have known what had happened to her. But I did not"He nodded.