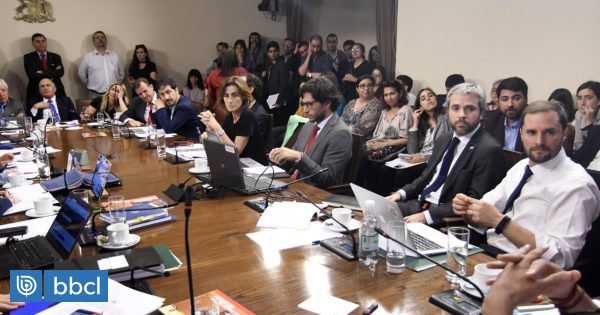 Due to the immediate discussion of the school coexistence project, the deputies agreed to vote tomorrow Thursdayin general, the initiative in Lower House Board of Education, while on Monday a special session will be called for voting in the hall.

Between Wednesday and Thursday, the Education Commission, must listen to the more than 30 guests who should receive in the instance, about the general debate of the school coexistence project, former Safe Classroom.

The project has an immediate discussion and for which the house committee will generally vote on the initiative on Thursday afternoon.

Due to urgency, it was also agreed to cite a special session of the Chamber of Deputies for next Monday, in order to meet the deadlines set by the Executive.

In opposition criticized again the urgency with which the government intends to discuss the initiative, even questioning the relevance and the supposed citizen support that it possesses.

The Communist Party (PC) deputy, Camila Vallejo, also he pointed out his criticisms to the mayor of Santiago, Felipe Alessandri, who has been one of the most energetic in the call to legislate the initiative readily.

"Whatever is being discussed, Mayor Alessandri could do immediately, updating the regulations incorporating the issue of carrying weapons," said the PC lawmaker.

Given the possibility of merging or approving this project with another similar initiative that also discusses the commission, Deputy National Renewal (RN), Luis Pardo, was contrary, because in his opinion they point to different issues.

"What this project does is fundamentally modify the procedures to be able to separate, in due process, more quickly," explained the pro-government deputy.

Position not shared by the Socialist Party deputy, Juan Santana, who criticized that they seek to legislate only on the basis of facts that affect some schools the commune of Santiago and the reality of all schools in the country is not addressed.

"I would have expected a discussion and a procedure for this different bill … which will also address the cases of violence that occur in my region, in Atacama," said the legislator PS, pointing out that in the northern region they produce fights between students for racism, something that does not address the project being discussed.

In addition, Deputy Santana had words for the head of Education, saying he would like "That was the minister of the entire country and not just the metropolitan region".

Regarding the background to the project, Christian Democracy (DC) deputy Mario Venegas said there are elements that must be specified, such as the fact that include the whole community in sanctions that apply only to students.

"Expulsions and cancellations of enrollments are administrative measures applicable only to students, in no case to a prosecutor or a teacher or an education assistant," explained the CD deputy.

The Minister of Education, Marcela Cubillos, who also attended the meeting, clarified this point.

"What the Senate bill does is to define which behaviors seriously affect school coexistence and within behaviors (…) there are some that can be performed by people who are different from the students"Minister Cubillos said, adding that the sanctioning processes that are established" obviously "are for students.

For the day of Wednesday the same day, the committee will meet from 10:00 a.m. to 10:00 p.m. to continue the legislative process of the project.