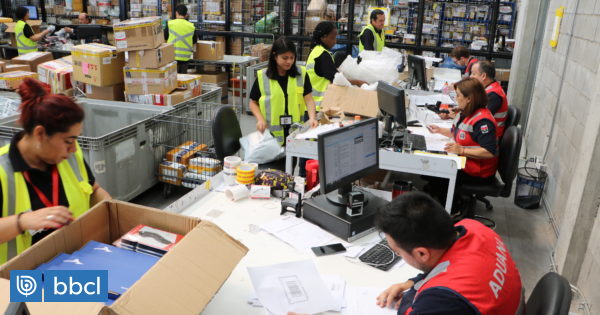 With the Chilean Post Office, to carry out a more efficient inspection of the growing e-commerce and international shipments arriving in the country on a daily basis, have implemented during the last weeks a Contingency Plan for holiday season.

The above, in the context of the explosive increase in this type of shipments, which in 2012 reached 500,000 parcels, shows that 2017 multiplied exponentially reaching the 17 million packages and envelopes.

These goods are processed at the Postal Factory of Santiago Airport and at the Quilicura Postal Technology Center (CTP).

According to Undersecretary of Finance, Francisco Moreno, "it is extremely important, since we already had a contingency plan in August in which 35 thousand packages were found that were still pending capacity, revision and subsequent delivery."

He added that "with the implementation of a joint work between customs officials and Correos of Chile, which is what I want to highlight, we were able to finish delivery of the delayed installment and today the deadline for the revision of a parcel or merchandise, which is brought from abroad, is five days, after which comes the corresponding delivery ".

The first fruits of this work between customs and state were seen in the middle of the year, when concrete measures were announced in August through September through a Standardization Plan that eliminated delays in the physical revision of merchandise. Today, this was announced on that occasion, the verification takes place in a maximum of 5 days since the merchandise is selected in the scanner.

Continuing with this optimization of processes, to the height of the year framed in the season of purchases of Customs of Natal, in a joint work with Correos, strengthened its endowment from November 19 with tax shifts at night and on Sundays, besides reinforcement in assessment and valuation with daily monitoring to avoid any type of delay in the stage of the process that is the responsibility of the service.

As always, in these processes the responsibility is shared with the users, who must be informed that this type of purchases via e-commerce portals, regardless of the values, are operations of importing products.

In this way, all buyers who bring goods to the country through the Chilean Courier or Courier companies, must comply with the current regulations, process the good visions of the competent bodies and consider paying taxes and fees, if applicable.

In addition, the audit contemplates the scanning of 100% of the packaging that enters the country through the Chilean Post Office and allows, based on risk profiles, to select the merchandise by capacity and thus prevent the entry of illicit goods.

Users should be advised that, after reviewing the Customs, if applicable, Correos de Chile may inform you if your merchandise must meet any additional requirements and / or payment of taxes and fees.

The regional director of the Metropolitan Customs, Wildo Arévalo, emphasized that "there are several important tips that citizens should mainly consider when making an international purchase." If they are medicines, they have to have the VB of the ISP or if they are food, they must be of Seremi de Salud. In addition, they must be careful to buy items that infringe intellectual property, copyright. "

"It should also be noted that the undersecretary left us a task for some time, in which we were very late and today we concluded within five days and more staff were organized, at 50% there is an ongoing recruitment of eight more people and that implies that the audit is being very efficient. Of the 100% that leave for review, 80% are subject to payment, "explained Arévalo.

For the correct determination of the payment of taxes and fees, the buyer must maintain the invoice or invoice and proof of payment that can be demanded through the Chilean Post Office, the agency that receives such documentation and presents it to Customs.