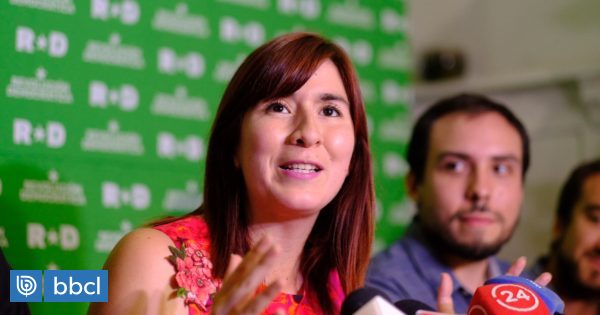 This Sunday, she went to vice Catalina Pérez who remained with the presidency of his party, after the elections of the Democratic Revolution (RD), with a 50.9% of the votes.

However, something curious is that there was a abstention rate which reached 92%Of the 42,000 voters, only 3,502 participated.

In view of this, Congresswoman Pérez, in conversation with the My Photo, he assumed that "the challenge of expanding participation is permanent in Chile and in the Democratic Revolution … Power is not just in Congress. "

However, he said that "we should put the numbers in context," arguing that this is the second election the party faces and that it has reached duplicate participation of the first, as well as increase by 40% in the election of the national political council.

"We must continue … And we must do self-criticism to see how we face this challenge, but we do not stop moving forward," he said.

"The DR has to consolidate itself as a political party with convictions, which is opposed to traditional politics, to political parties 30 years ago"

Pérez proposed to lead the opposition together with Frente Amplio and "a transformative political project that invites a different Chile to dream."

Faced with the rejection of the administrative pact, he argued that They hope that "the agreements will not be to" cuotear "the presidencies, but to guarantee rights, strengthen democracy and, finally, ensure coordinated opposition. "

"We have decided to split up to show that the institutional framework serves to change people's lives." Now, we will not prove this in two years or in the next four years, it will be a long process, "said the president-elect of the DR.

To do this, the deputy said that you must first "restore the confidence of citizens" and democracy "of material, not just of the formal." "Radicalizing democracy is a permanent challenge," he said.

Alejandra Millán, one of her candidates who obtained 354 votes, said she would work in the "Decentralization and deconcentration" of power, so that the party is not "parliamentarized". In response, Perez said that "it is much deeper" than a parliamentarian leads.

"Power is not just on the walls of Congress… We have to strengthen territorial work, for example, our presence in organizations and social movements, "he said.

Thus, the deputy argued that "parliamentarization" is resolved with concrete measures and "placing the political focus where they should be."

"We do not hesitate to make concrete proposals and we will not hesitate now that we have to lead the game, "he emphasized emphatically.

In the words of the president of Christian Democracy, Fuad Chahín, who asked the coalition to " a little more respect for the parties that have a history and what it means to be at a party like ours, "the MP was emphatic in acknowledging that there is a" deep crisis. "

In this case, Chahín also called "a little, humility"

"Democratic Revolution and the Broad Front, which has been the great novelty of politics, like modernity, What he won over the weekend was abstention."Added the DC leader.

However, the deputy assured that there is a crisis, but "a deep crisis in the Chilean political system" and that the challenge of increasing participation is "all of us who have decided to be a party".

"We have to replace the trusts, because These funds have been damaged … Everyone has to take responsibility"Answered Perez.

In this sense, he pointed out that the DR has been responsible for self-criticism. "We are not afraid to say that we have a crisis in the Chilean political system, that we have to retreat, to open the Congress," he said.

At the opening, he said that "If we went in, it was not for us to close the door, so that organizations, social movements and territories could enter … If we fail to recognize that Chile deserves a different policy, we will not be able to take on the new Chilean political cycle. "

One of the focuses is to lead the opposition, he said, with the "humility" with which they took over. "Social movements and the Frente Amplio are our main allies."

"We are interested in doing this based on a political project and not based on an electoral calculator … We have to offer a transformative project that changes people's lives," he concluded.