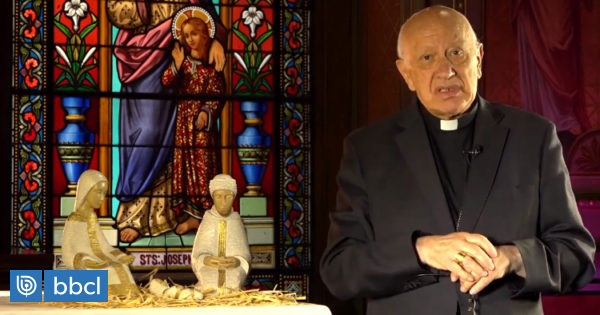 The Archbishop of Santiago, Cardinal Ricardo Ezzati AndrelloHe sent a national message to the Christmas party, where he dedicated the words to the most vulnerable and asked for a humble heart.

Ezzati's words join those of Pope Francis, who a few hours ago also sent a message to the world for this feast, albeit in a more critical tone.

"The Christmas party is also transformed into the feast of brotherhood, because we can not really welcome Jesus if our heart does not open to welcome others," the cardinal said.

In this sense, religious insisted on the need to help the most vulnerable; for those who do not have a good time during this time.

"I would like to wish all my brothers and sisters, and all men and women of good will, to welcome an expression, an invitation from Pope Francis this Christmas. He told us:" The heart hardens when it does not love " And ended with a prayer: "Lord, give us a heart that knows how to love …", he added.

"This Christmas we ask the Lord for a humble heart that knows how to love, so that this heart does not harden in our relationship with God, nor harden in our relationships with our brothers and sisters, especially those who most need: the sick, the poor , those who feel abandoned, those in prison, the migrants who had to leave their homeland and often, also the most beloved, to find a future, "he concluded.

Despite his words, the panorama of the Chilean church was not one of the best in recent months. Whether it is because of the country's lukewarm response to the pope's visit or cases of sexual abuse by religious and the cover-up of some.

In addition, earlier this month, Cardinal Francisco Javier Errázuriz was removed from the circle of councilors of the Pope.

A hidden message in the middle of the crisis

Pope Francis became the Second Pope in history to visit Chile, which took place between the 15th and 18th of January. The trip, however, was marked by criticism of the figure of the former bishop of Osorno, Juan Barros, who many accuse of covering up the abuses perpetrated by Fernando Karadima in the parish of El Bosque. On his first day in the country, from the Palace of La Moneda, the bishop of Rome apologized for the abuses committed inside the Church and admitted feeling "ashamed".

After his departure, all bishops presented their resignation, Barros removed from the Diocese of Osorno, the Archbishop of Malta (Charles Scicluna) made two trips to Chile to investigate allegations of abuse and prosecution invaded religious offices to complete his investigations into the subject .

Finally, for the first time in history, the Te Teum Ecumenical of the Patrias was not transmitted in any channel of the open signal, Francisco Javier Errázuriz – who faces a "false testimony" complaint – was taken from the circle of the Pope's Father John O & # 39; Reilly was expelled from the country after serving his sentence for sexual abuse against a student at the summits and Francis expelled Karadima from the priesthood, eight years knowing his abuses.